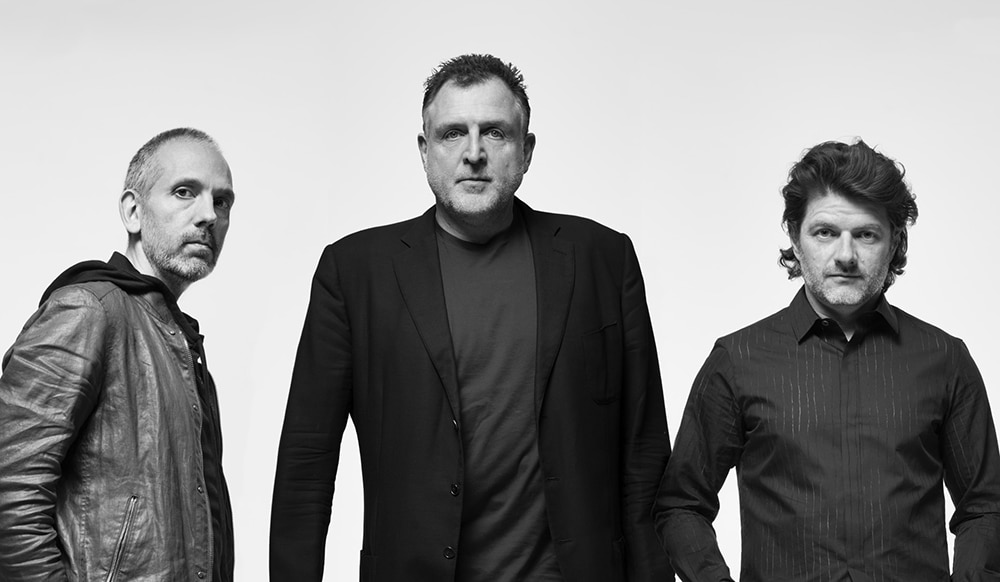 Gernot Bohmann, Harald Gründl and Martin Bergmann are the renowned Austrian design trio EOOS.
EOOS operates in the fields of premium furniture and product design for clients such as Alessi, bulthaup, Carl Hansen & Søn, Dedon and Walter Knoll. They have designed brand spaces for Armani, Adidas and the MAK-Museum of applied Arts. To date, they over 15 technical patents and received more than 160 international awards.

For several years now EOOS has also dedicated their time to projects in social and sustainable design and have worked for the Bill & Melinda Gates foundation on designing toilets for the poor for which they received a “Special Recognition for Outstanding Design” from the foundation.

For EOOS, design is a poetical discipline somewhere between archaic and high-tech. EOOS examines rituals, myths and intuitive images as a starting point within the scope of the Poetical Analysis®.

UD Magazine caught up with the trio earlier this year to talk about the boundaries of design and their philosophy as successful designers.

If you have Ego, you should work alone or even better – not become a designer.

You appear to love the mid-20th century period above all others. If this is true, can you tell us why?

Yes, we are really big fans of this period and especially of this period in time in California. The architects Rudolph Schindler and little later Richard Neutra both came from Austria and made their career there.
We have visited a lot of their houses and It seems that the sun and the trade winds from the Pacific made their approach to modernism and their thoughts lighter. Charles Eames who lived and worked in Santa Monica once said: “Never let the blood show”. It all should all look like you have made it yesterday evening and not showing the years and sweat and frustration. This approach to lightness is what we love. This is what we can learn from mid-century California.

How important is history and place to you?

When we work with a client who has a strong history it all gets easier for us. Like for example at Carl Hansen & Søn you can feel the gravitation. It is like a planet that you can stand on. Of course the difficult thing is to find a legitimate reason to be there, but when you have found that, you won’t get lost. You are held in place by gravitation and history. That is a perfect situation. 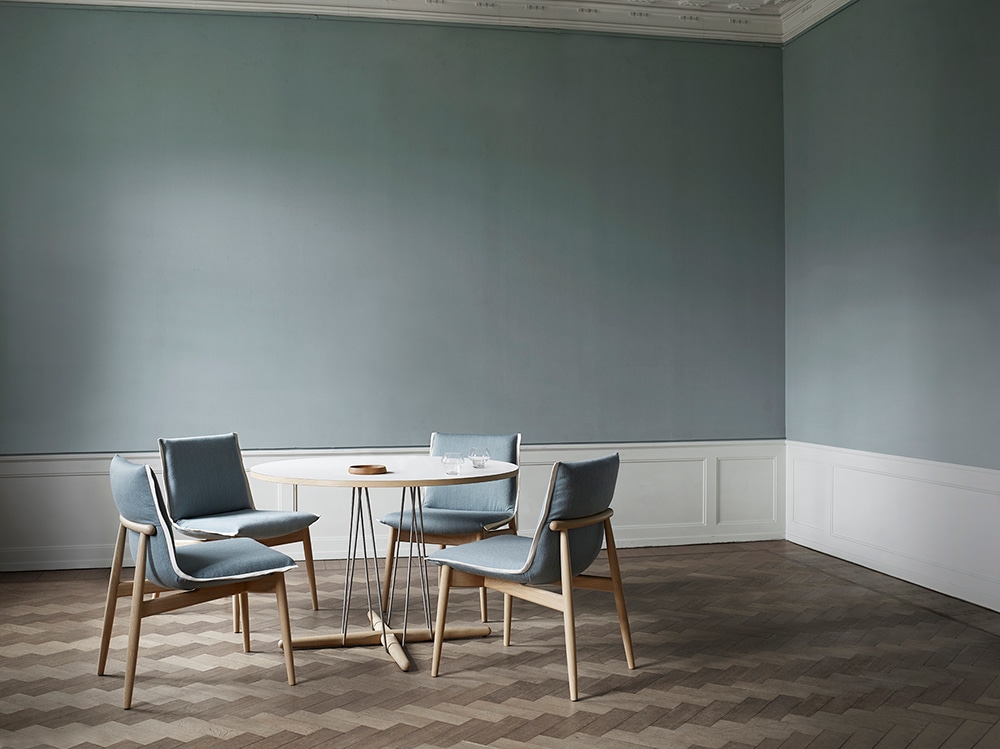 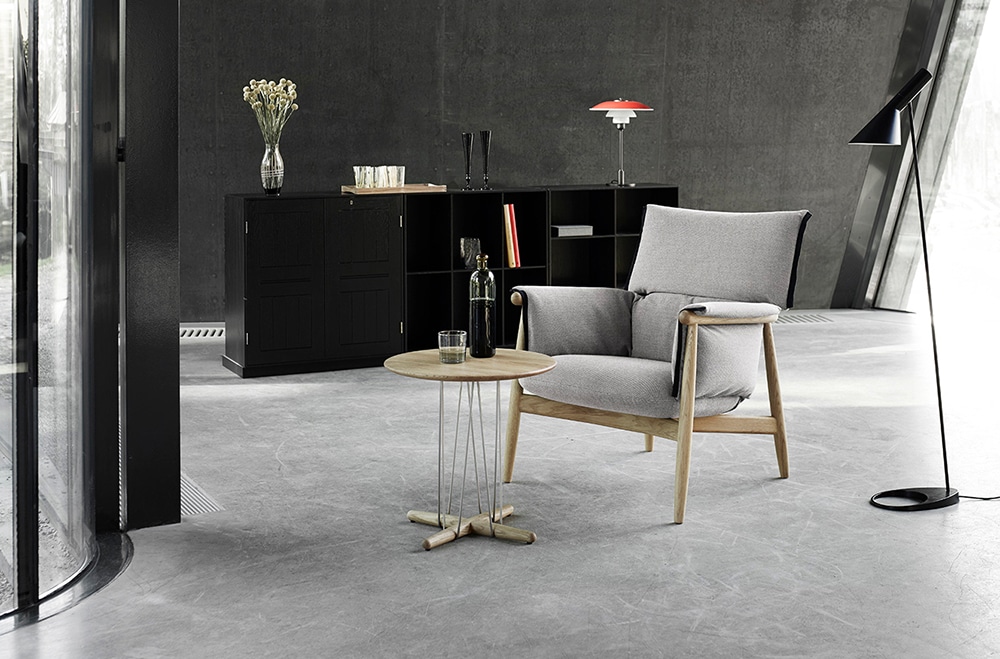 You speak about the culture of human ritual and tradition as a conceptual starting point. Could you give us some examples of this?

For example when designing the concept of the b2 kitchen for bulthaup we did a big poetical analysis of the theme. We collected thousands of images as a reference system.
In the end we came up with a workshop kitchen consisting of a tool cabinet and workbench as the central elements. The workbench is an archaic and deeply engraved image. It is a design resistant object, it is what it is, for centuries it has always looked the same. This is the essence and we made only one innovation: our workbench could easily be enlarged or shortened and the functions of the surface can easily be changed anytime. The idea is flexibility in your life. When you change, your kitchen changes with you.
And the second element, the tool cabinet, is a highly ritual object. When it is closed you see nothing, only mono material. Your eyes can glide endless over a calm surface. But when you open it, you transform it and you come to the opposite. You see everything, every detail. You see your whole universe of objects in one view. Like the tool cabinet of a craftsman. The order inside is created by the user and not by the designer. 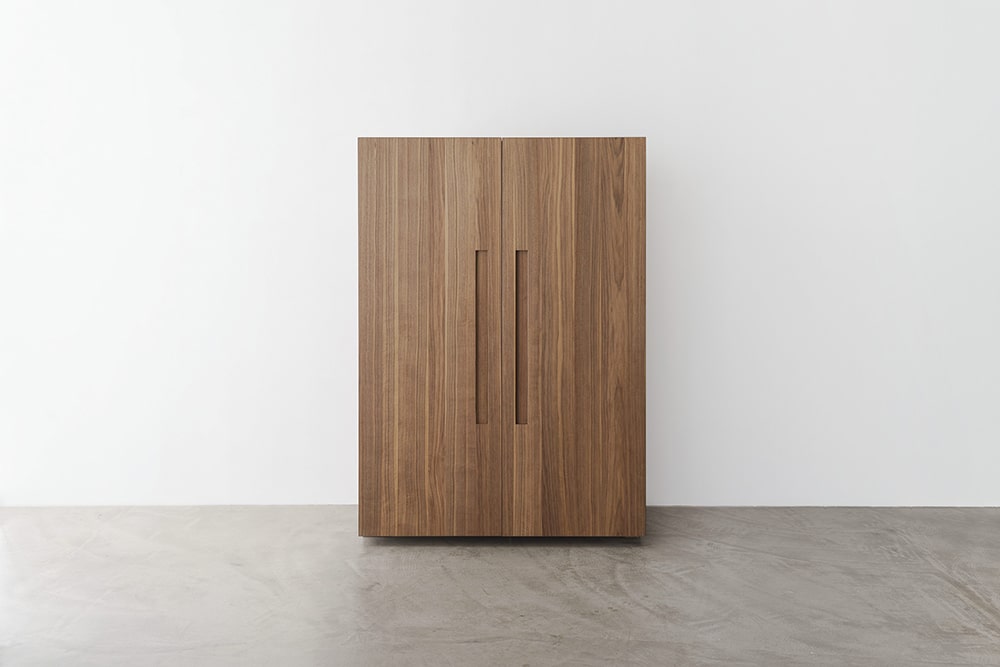 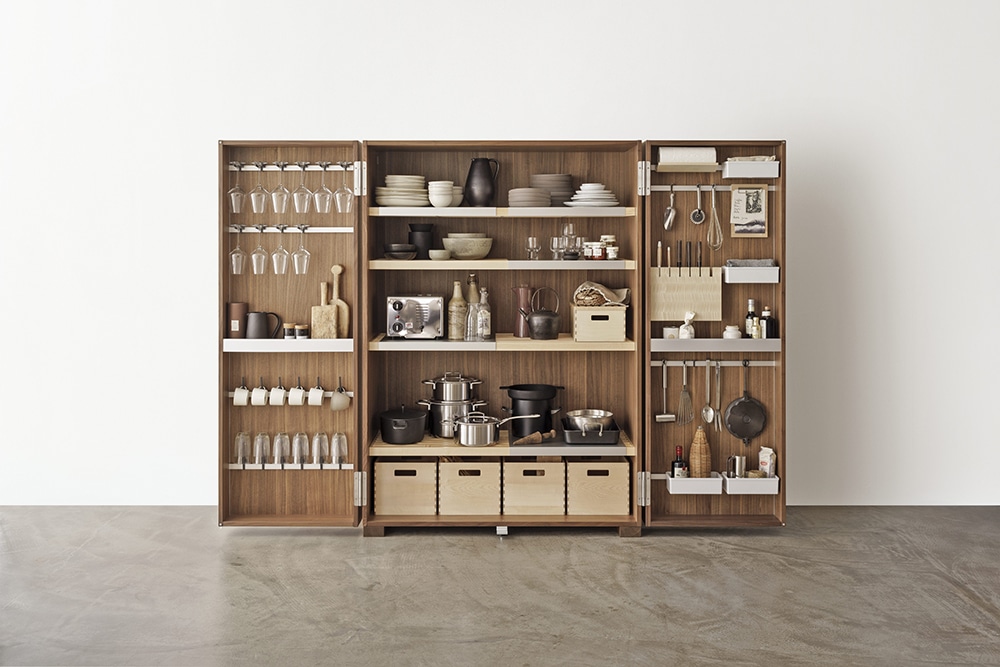 Above: Tool cabinet  for b2 kitchen – bulthaup

Success is not easy in any creative field, especially at an international level. What were the main obstacles to be overcome in your case?

When you start as a young designer searching for a job everyone asks you what you have done already. And when you have done nothing you won’t get a job. That is a circular situation which makes it very difficult to break through. To find the right clients with the right feeling is the hardest. For us it was always the main goal to establish long term relationships, where we can stay in movement. To do something from standing still needs a lot of energy, whereas when you are in the flow one thing follows the next. Another critical point is the right speed. At the beginning it seems that everyone works in a rush, trying to finish projects and get from one to the next as fast as possible. Now we try to work as slow as possible. Without rush, we take our time to discuss, analyze and iterate.

One of the scourges of our advancing years is a tendency towards conservatism. How do you fight this?

We try to work with the right people and the right companies. That is the only thing we can do.

It is definitely the power of an idea that fascinates us most in design.

Does each of you have a specific area of interest/expertise?

Martin and Gernot are doing more the furniture design side and Harald more the social design side. But concept wise we all share the thoughts. At the end no one can say this or that is my idea. The idea lives outside from us, as generated by a fourth person. It is always a surprise. A strong idea pulls us, pulls our studio, our client and also the consumer. Everyone follows it. It is definitely the power of an idea that fascinates us most in design.

You speak of sustainability and mass consumption: is there not an inherent contradiction in these concepts?
We believe that there has to be a transformation from mass consumption to a sustainable quality society. The booming economy led to wealth. But this wealth was based on the exploitation of resources and, ultimately, led to a global climate crises. And we believe design can help building this awareness. Design always works within the logic of consumption, but should give you the right reason to buy something new. 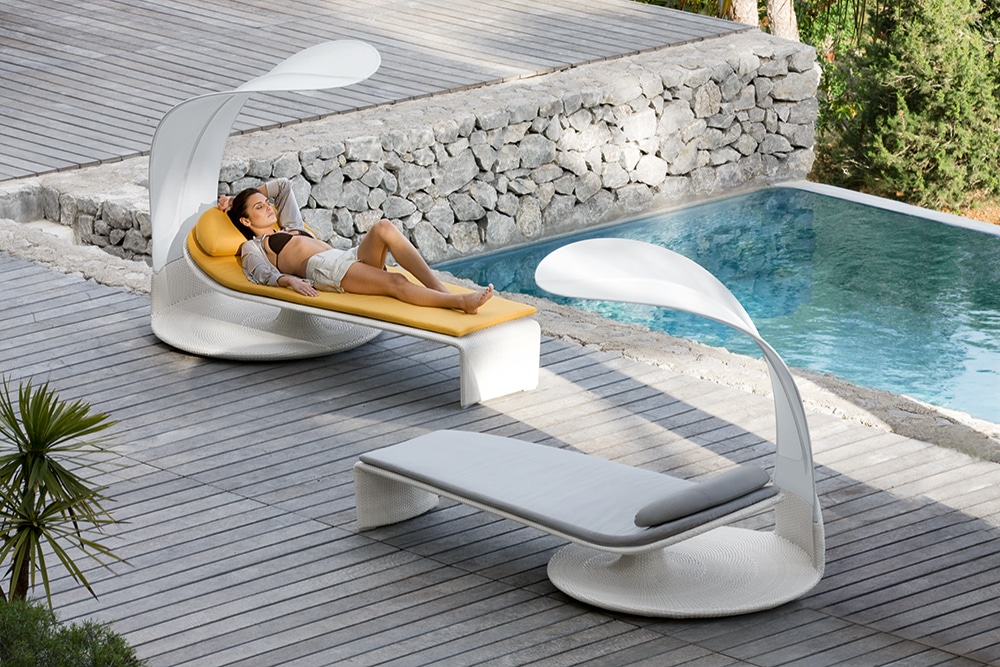 Above: Sunbeds for Dedon

Much of what you do involves a wider concept of design, such as your work with the Bill & Melinda Gates Foundation and digital currency in refugee camps. How far can you push the boundaries of design?

Products are always part of a wider system. With the Bill & Melinda Gates Foundation we have developed a new toilet user interface, which separates urine from faeces in a very simple way. As a result 80% of the nitrogen in the wastewater, responsible for algae growth and dead zones, can be removed from the wastewater stream. The user does not have to change her/his behaviour, the innovation is inside the toilet. It is really cool that we had the possibility to industrialize this concept with Laufen, one of the leading ceramic manufacturers in the world. This concept goes far beyond only producing and selling a toilet. It represents a whole new system. This example shows that industrial partners like Laufen are willing to go this new complex and game changing way. There the boundaries are really pushed.

Philosophy seems to be important to you as designers. Should it be taught more in schools, do you think, and would it be useful in other professional areas as well?

We would say it is more the poetry which is important to us. But we need it mostly for our own orientation. When we have found a new direction we are iterating the design endlessly to try to optimize it. We look at it from 360 degrees and try to make something that is good in every dimension (poetry, construction, production, use of materials, assembly, transport, costs, life cycle, etc.) Design means to say no to 95% of what you have made. You are throwing away something no matter how much work it was. Frustration is a big part of design. Design has nothing to do with glamour – it is all about hard work. We believe that would be important to be taught.

Design has nothing to do with glamour – it is all about hard work.

The greatest accolade awarded to a composer, it is said, is to hear somebody in the street whistling one of his tunes. Have you ever had a comparable experience, a chance encounter with one of your designs?

Very often we see our products – on television, when we travel, in the apartments of friends and so on. And most of the times we do not feel connected at all. This are very strange encounters. Our designs live their own lives. They have left us forever.

Have you any advice for start-up threesomes on how to stay together for so long?

Being generous. Not always everyone can give 100%. When one of the group is weak the other one has to jump in. And no Ego! If you have Ego, you should work alone or even better – not become a designer.

A shortened version of this article first
appeared in the
6th issue of
UD Magazine.