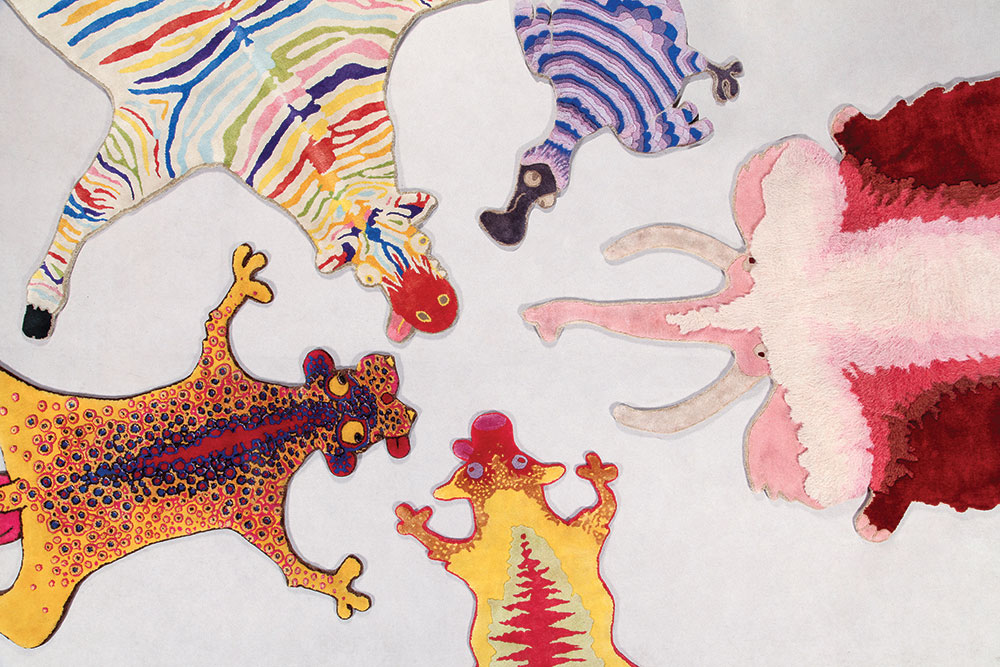 The weird and wonderful world of the Haas brothers

There’s something weird about those Haas brothers. Freaky, one could more accurately say. They make freaky artwork, freaky furniture and freaky objets d’art. But among the dictionary definitions of a freak is “an unconventional person”. And the Haas brothers are unconventional, to put it mildly, producing work that is also beautiful, highly coloured, fantastic (in the proper sense of the word), sometimes provocative, often absurd and humorous, surreal and very creative.

The fact that a body of work is unconventional does not, in itself, signify excellence, any more than conventionality always means the absence of creativity. Picasso, after all, painted the same subject matter that had been painted for thousands of years. He just did it differently. Like Nikolai and Simon Haas, he looked at things as they had not been looked at before. More sculptors than painters, the two brothers have managed to retain, as adults, the exuberant joie de vivre that their upbringing in a creative environment instilled in them. It’s no coincidence that Picasso’s father was also an artist. 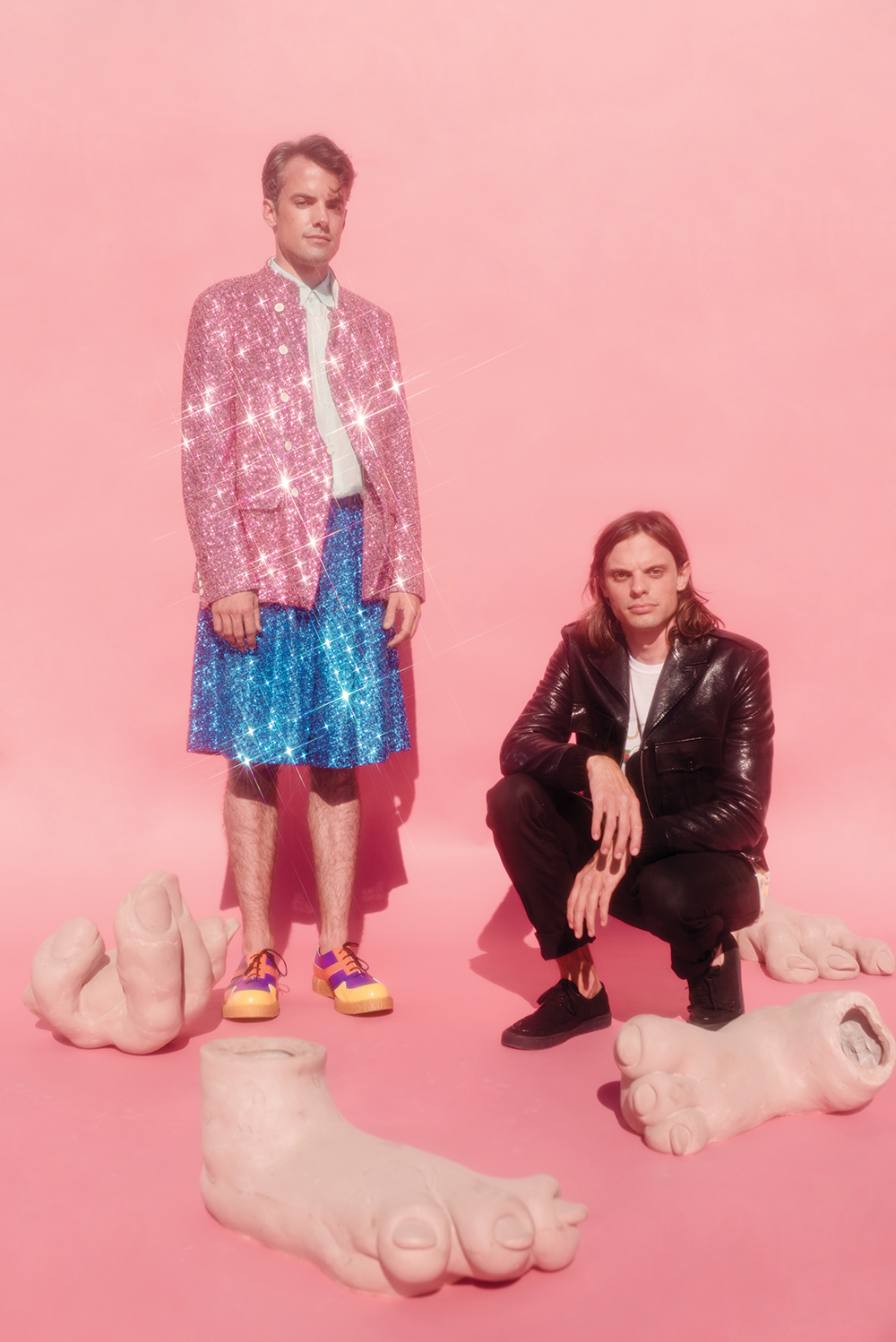 Above: The Haas brothers are unconventional, to put it mildly…Simon Haas (left) & Nikoli Hass

Although born in Santa Monica, and now regarded as quintessentially Californian, they grew up in Austin, Texas. Their mother was an opera singer and their father a sculptor, and as children they were given more or less free rein (and probably reign) in the studio. They made things, gaining at an early age both the skills needed to work creatively and the creativity needed to work skillfully. Simon chose, when the time came, to study at the Rhode Island School of Design and Nikolai formed a band in Los Angeles.

They began working together in 2009, making bespoke furniture for the actor Toby Maguire, and success in this venture attracted other celebrity clients in LA. They opened their studio there a year later, since then exhibiting in some of the most prestigious venues in the country and collaborating with people in other creative fields. Their work has been shown worldwide. 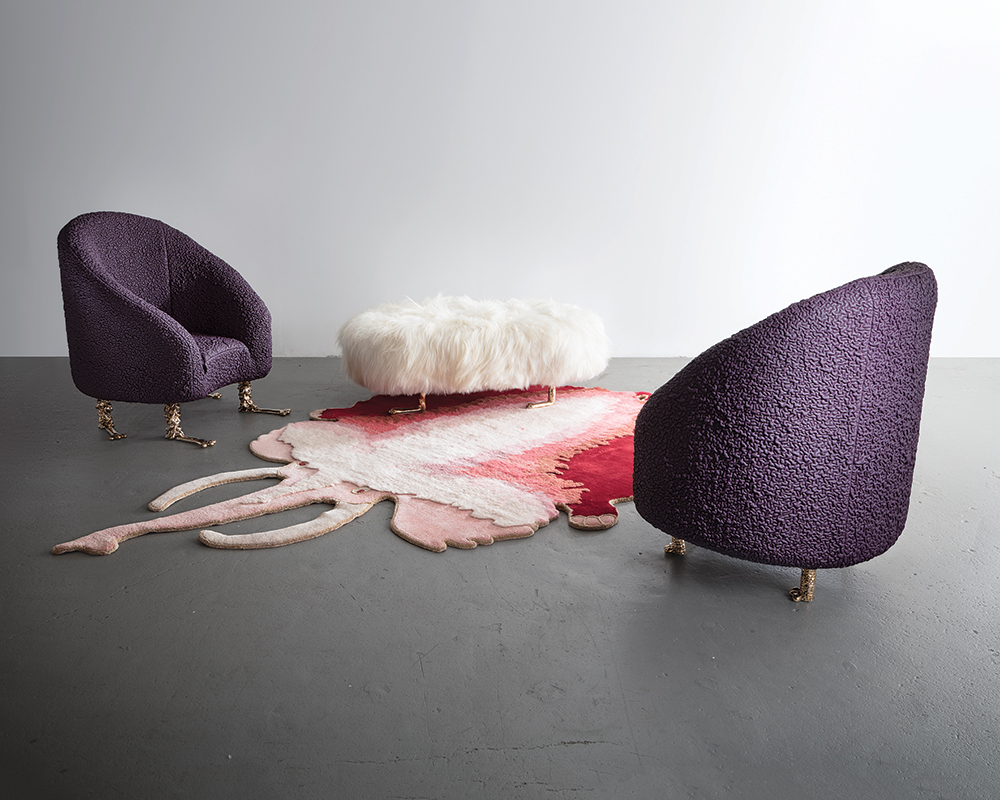 In 2014 the brothers travelled to South Africa and found inspiration in the traditional craft of coloured beadwork, which led to a collaborative project with local Cape Town women, which they named Afreaks. The immediate result was exhibitions in Cape Town and the United States of fantasy creatures and giant mushrooms in patterned beadwork, while in the longer term they helped provide a steady income for the Monkeybiz team, as they are named, back in South Africa.

One’s first reaction to your work: these guys are crazy! How seriously do you work on each idea you develop?

Niki: Ha ha! I’m happy that’s the reaction, because we work really hard on all of our work but truly want the experience of it to be fun and easy. Our work is humorous and brightly coloured and odd at first glance, but we’re really adamant about inserting real meaning into it. We often create micro economies around our work, as well as try to use our platform to advocate human rights. That’s truly what our work is about. The crazy aesthetic is just our means of delivery. The true work of our practice is staying true to the philosophies and culture we’ve set up inside our studio. Simon: We take our work very seriously. Each object takes hundreds of hours of hand work and years of research and development. We strive to make objects that are funny and surreal but that are extremely carefully and beautifully made. 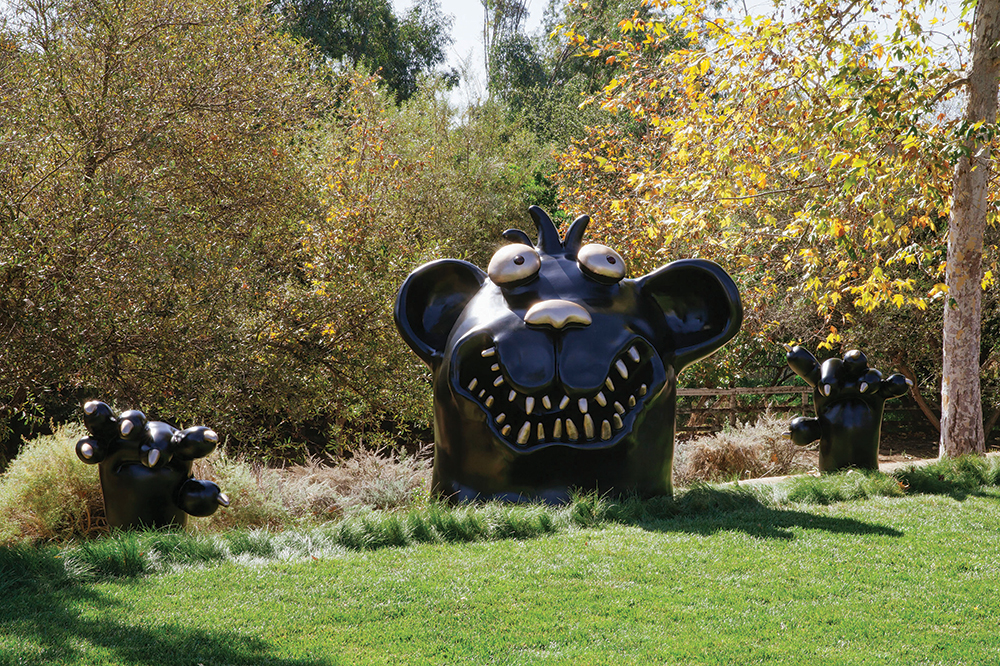 The nature of your work as art pieces, and your reputation, must make it too expensive for the average home owner. Would you ever consider producing a bargain range?

Niki: Yes, we have! We did a project with Rihanna, called L’Objet, and we’ve just released a set of miniature sculptures named Microfreaks. All of these projects are meant to be more affordable. To be fair, they are still expensive, but much less so than our art pieces. In the future we plan on releasing some cartoons! They will be basically free, so we’re stoked about that too. Simon: Our work is expensive primarily because it is handmade with fine materials, and we wouldn’t sacrifice quality in the interest of producing something less expensive.

You’ve expressed admiration for Duchamp, Warhol and Basquait, which of these would you like to have collaborated with?

Niki: I want to collaborate with people who don’t work in such a similar vein as us. Instead of working with another painter or sculptor, we’ve chosen to work with musicians, cartoonists and communities in need – people who don’t do what we do. Simon: If I could collaborate with anyone living or dead, it would have to be Gaudí. His imagination and appreciation for science would get me very excited. 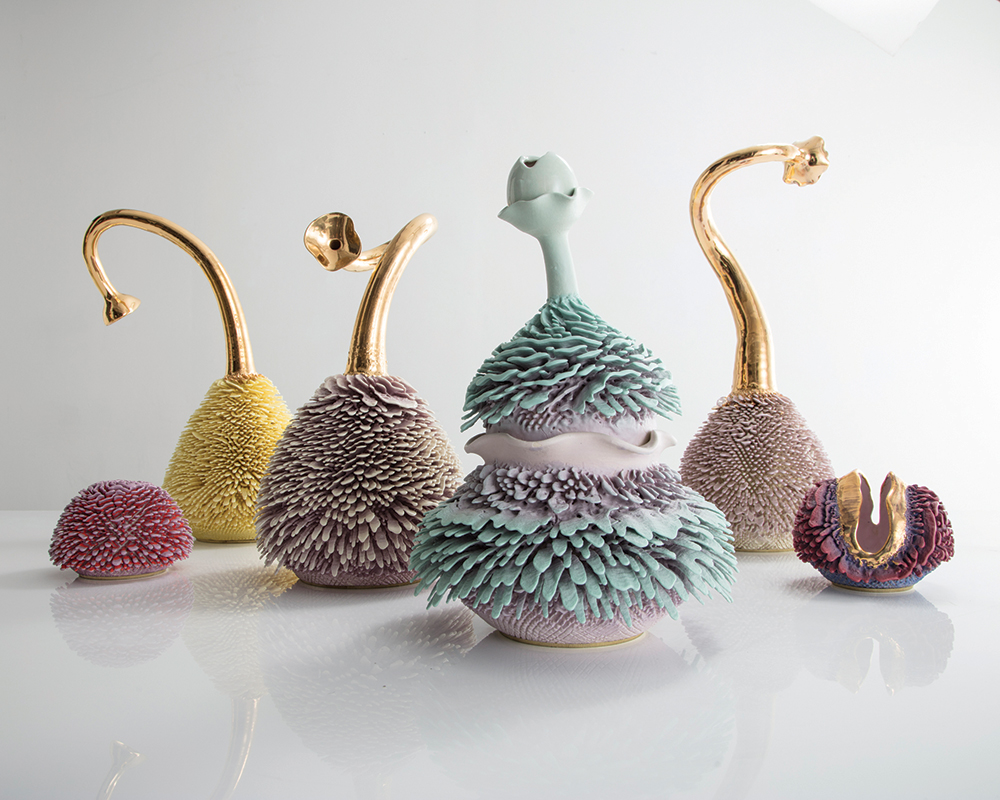 Many of your pieces are undeniably cute. How do you avoid falling into the trap this could create?

Niki: It’s only a trap if you see it that way. We’re just making what we make! I like cute shit. I’m happy for people to see it that way. Simon: I don’t think cuteness is a trap! I think it’s a really valuable thing. It actually serves an important purpose – imagine if babies weren’t cute! Cuteness is essential for survival and humans have a strong positive reaction to it.

Afreaks debuted at Miami Design in 2015. Do you see this collaboration as long term?

Niki: Yes! It took about two years to build that collection so the project has been rolling for about six years now. We plan on creating freaks for the foreseeable future and beyond. So I’d consider that long term. We’d love to keep it going for as long as possible because that was a community with so little money that our project brought a much needed income. It would be a shame to pull that income from the community. Simon: We very much see this as long term. We have been working with the same group of women for more than six years and hope to keep it going for much longer. They’ve become a really important part of our practice. 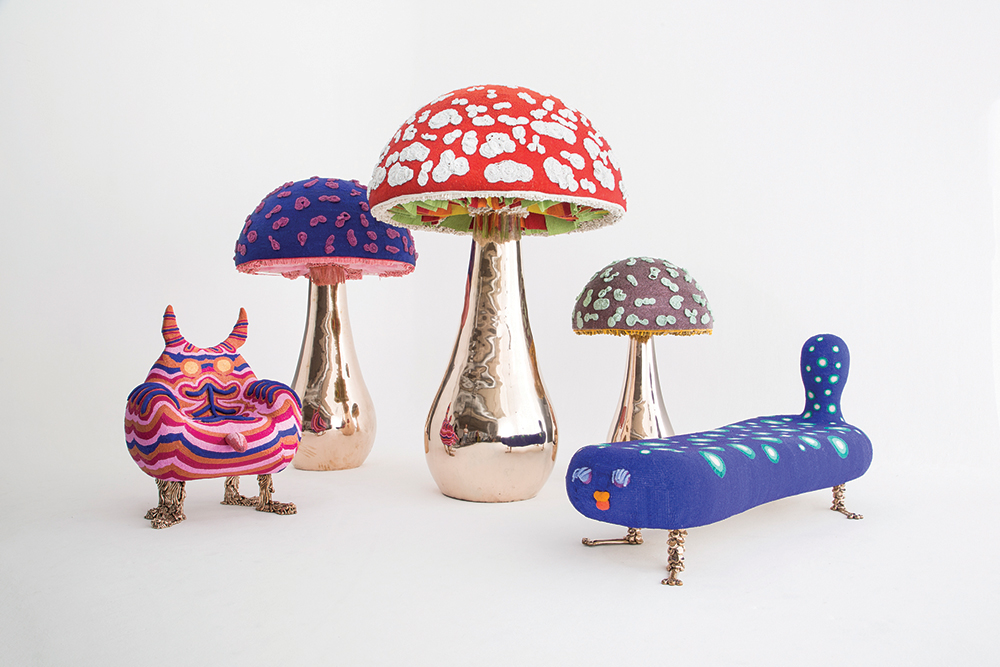 You’re both young, bright and creative. What plans do you have to avoid becoming old and boring?

Niki: Haha, I have a two-year-old, so that’s my main plan. That and to keep making art and having fun. Simon: I can’t avoid becoming old and if I wind up having a calmer and less exciting life, I very much hope that I settle into it happily. I really value having a calm and quiet home life and will take all the changes life brings in my stride.

Are you changing the world?

Niki: I think we’re changing our little corner of it, yes. I know we’re making a big difference in the communities we engage, so hopefully those differences echo into bigger things in the future. Simon: I do hope to leave a mark on the world but I don’t think I can say in my own lifetime whether I’ve changed it or not. If anything I’d like to influence young artists by telling them to just keep pursuing what they’re doing and not let what others think stop them; that boundaries set in place by markets should never influence what you want to make. 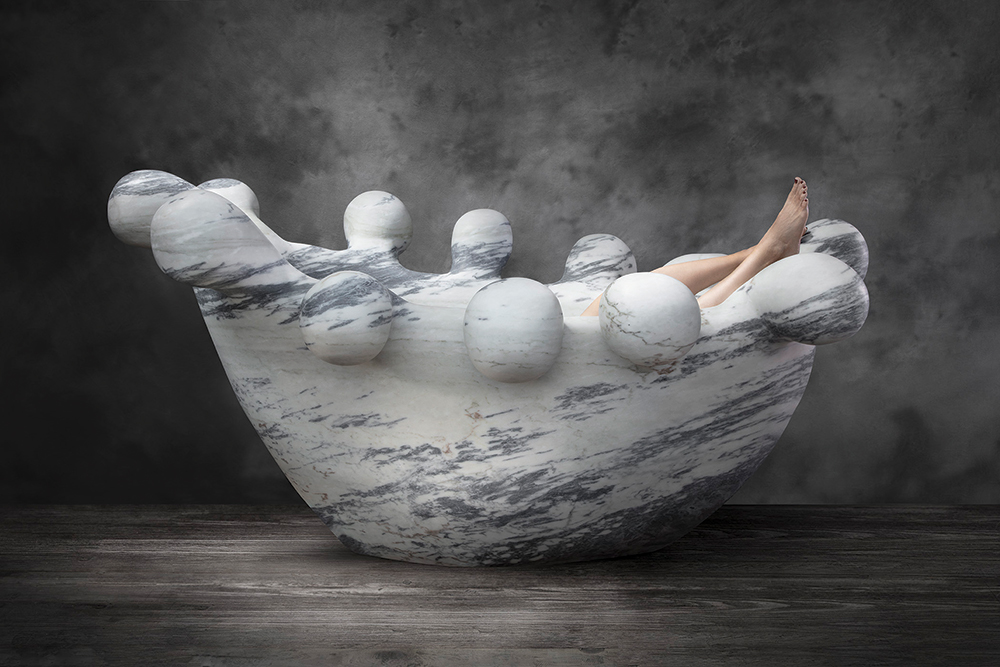