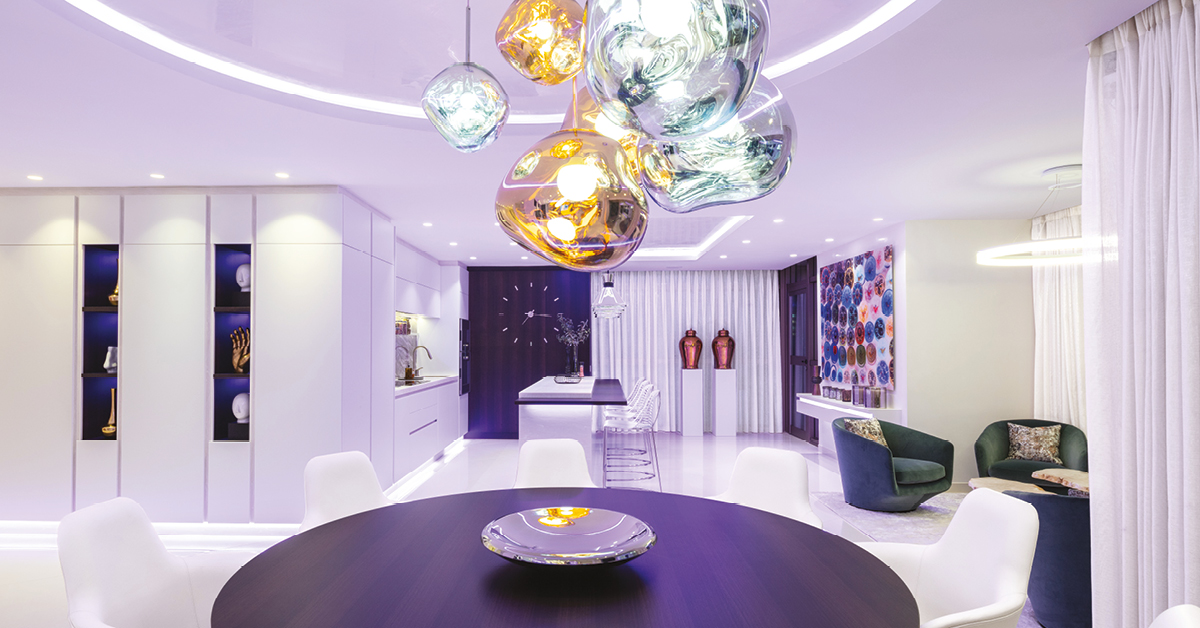 Tangier, the Moroccan Saint-Tropez, is the meeting point of the Mediterranean Sea and the Atlantic Ocean, but it’s not just the waters that have been mixing here for centuries. Berbers, Phoenicians, Arabs, colonial powers, artists and celebrities have all left traces of their culture on the modern version of this mythical city. This Tangier apartment melds perfectly with the setting, combining ultra-modern interior design and comfort with the traditional elements of a Moroccan home. 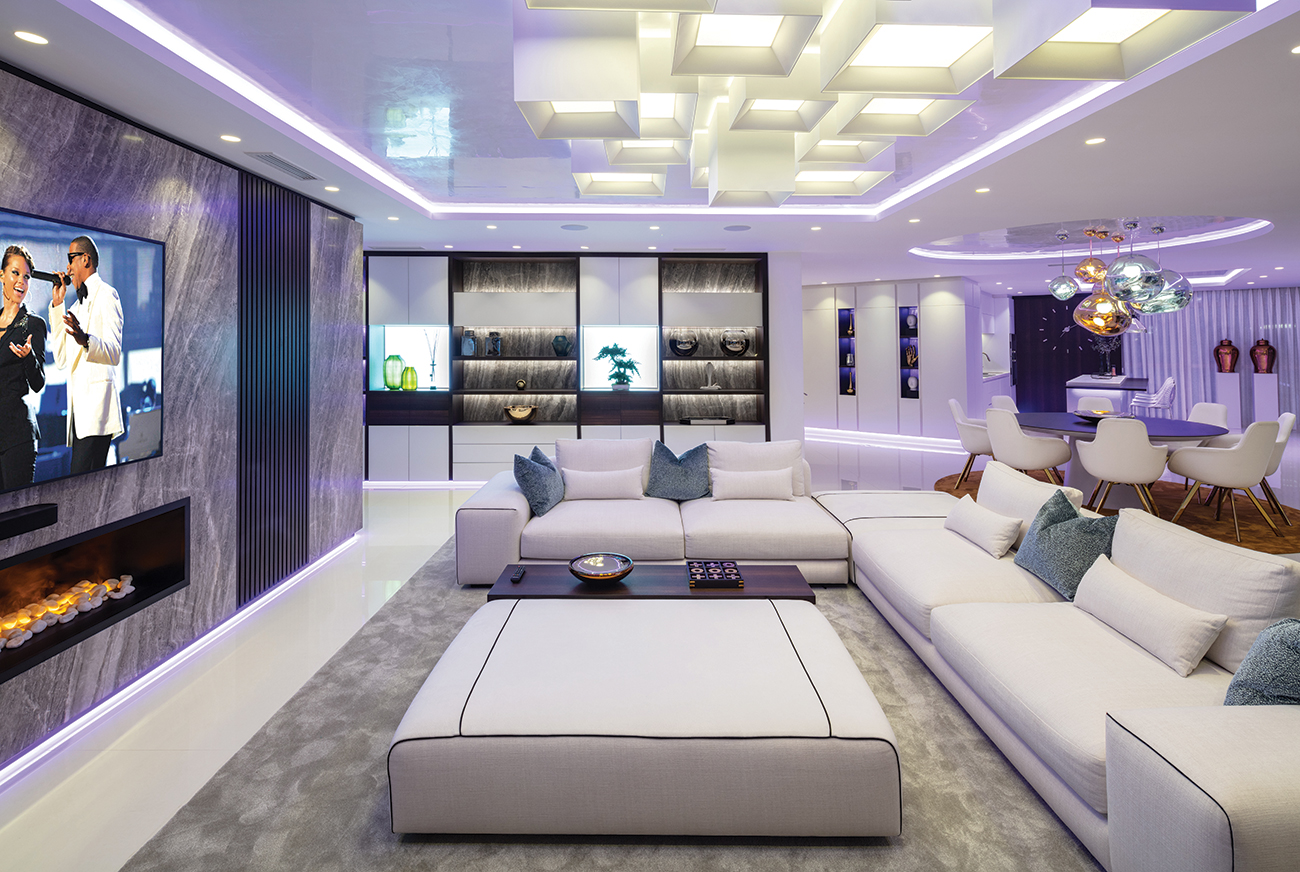 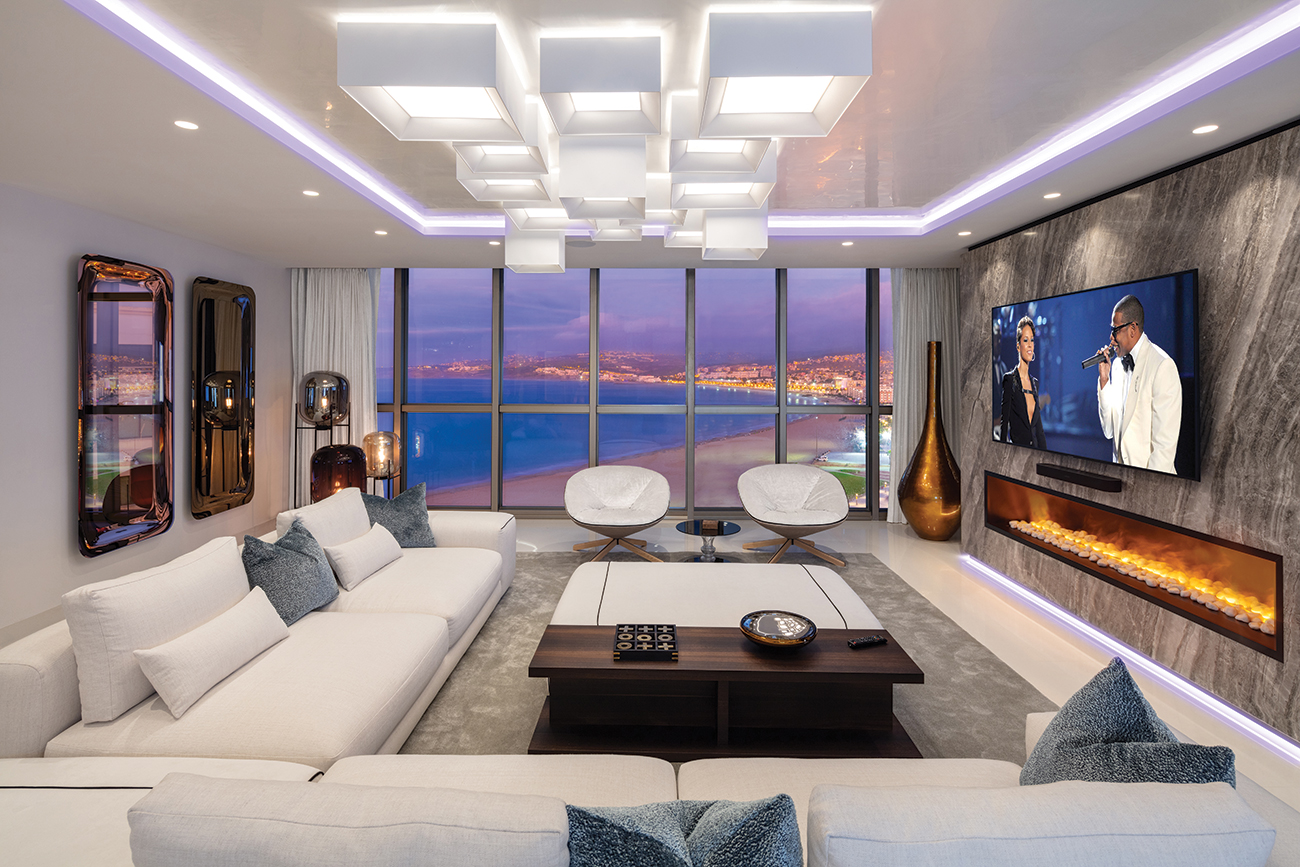 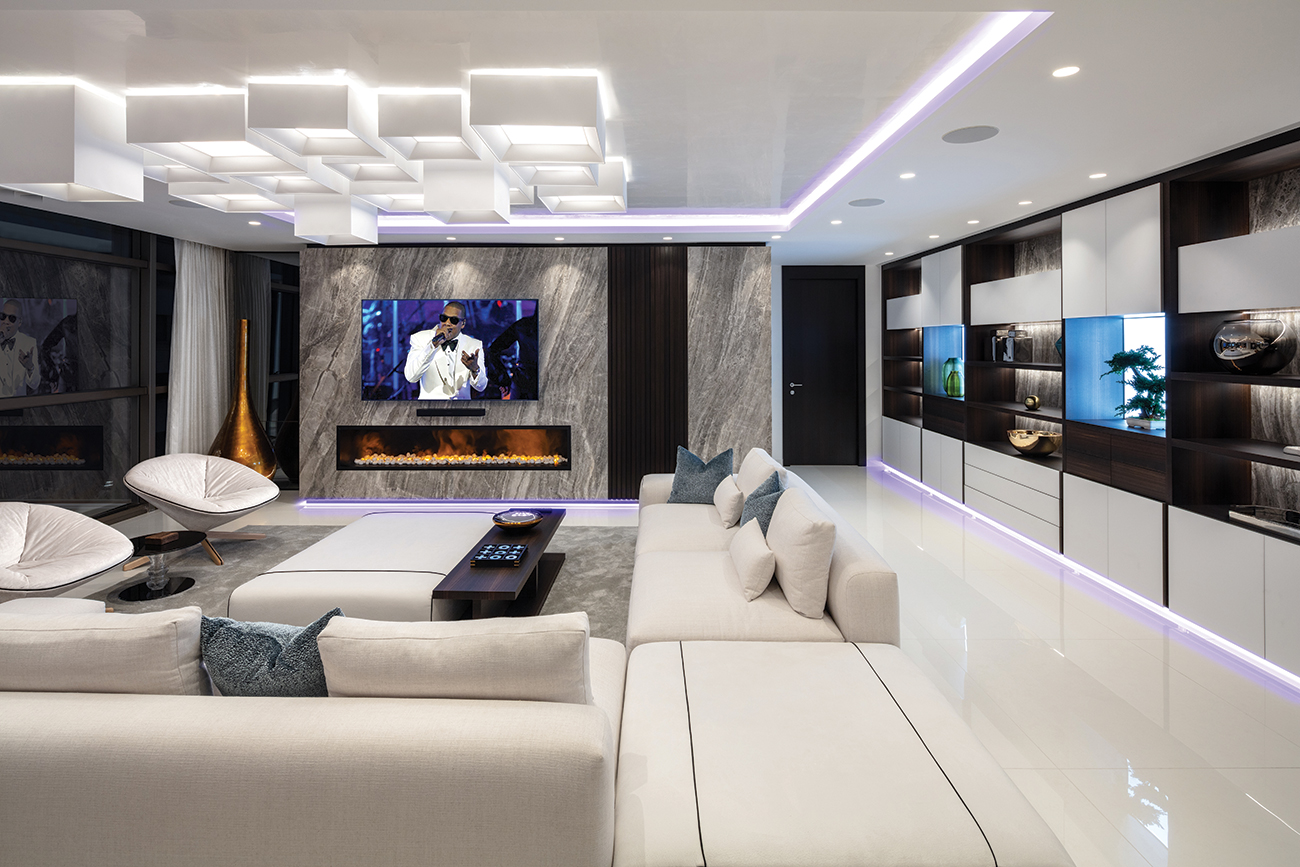 Far from a typical home you’d see anywhere in Morocco, this spacious 320 square metre corner apartment was created by combining two separate flats in the new Tanja Marina Bay development. Knocking down walls and practically starting from scratch UDesign completely reinvented the space turning it into a fresh contemporary home with breathtaking views over the port on one side and the main promenade of Tangier on the other. 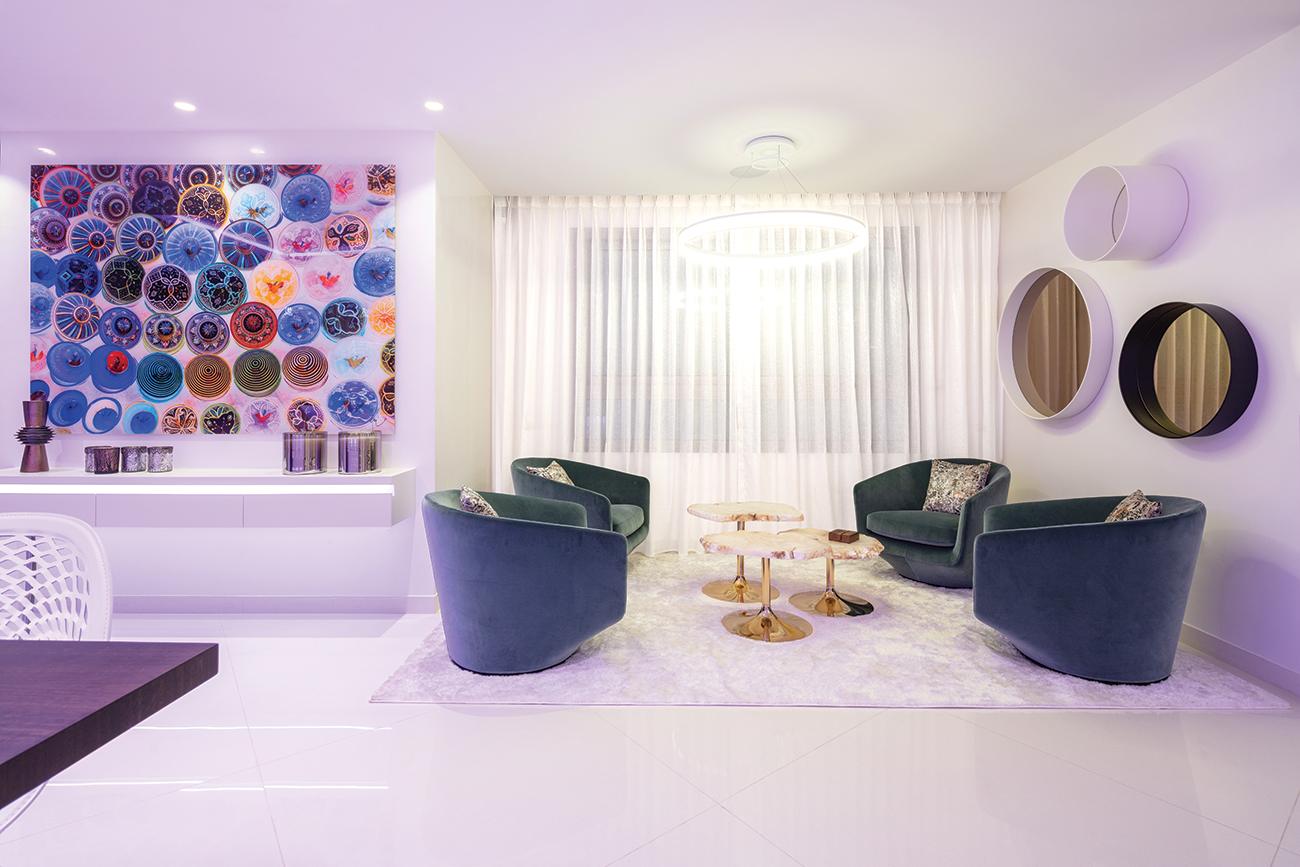 Above: The circular nature of elements in this area evoke the spirit of the past, where elders and guests of the tribe sat in a circle around the fire, under the desert stars. U Turn Chairs by Bensen, centre low tables in gold and onyx by Edra, mirrors by Sovet Italia.

Aside from three bedrooms, the apartment has extensive common space, which consists of the dining area, living area, TV lounge and jaima, a traditional Moroccan sitting area. One could practically spend the whole day between the four areas – chatting, making and drinking tea, relaxing next to the fireplace and watching the ferries go by. 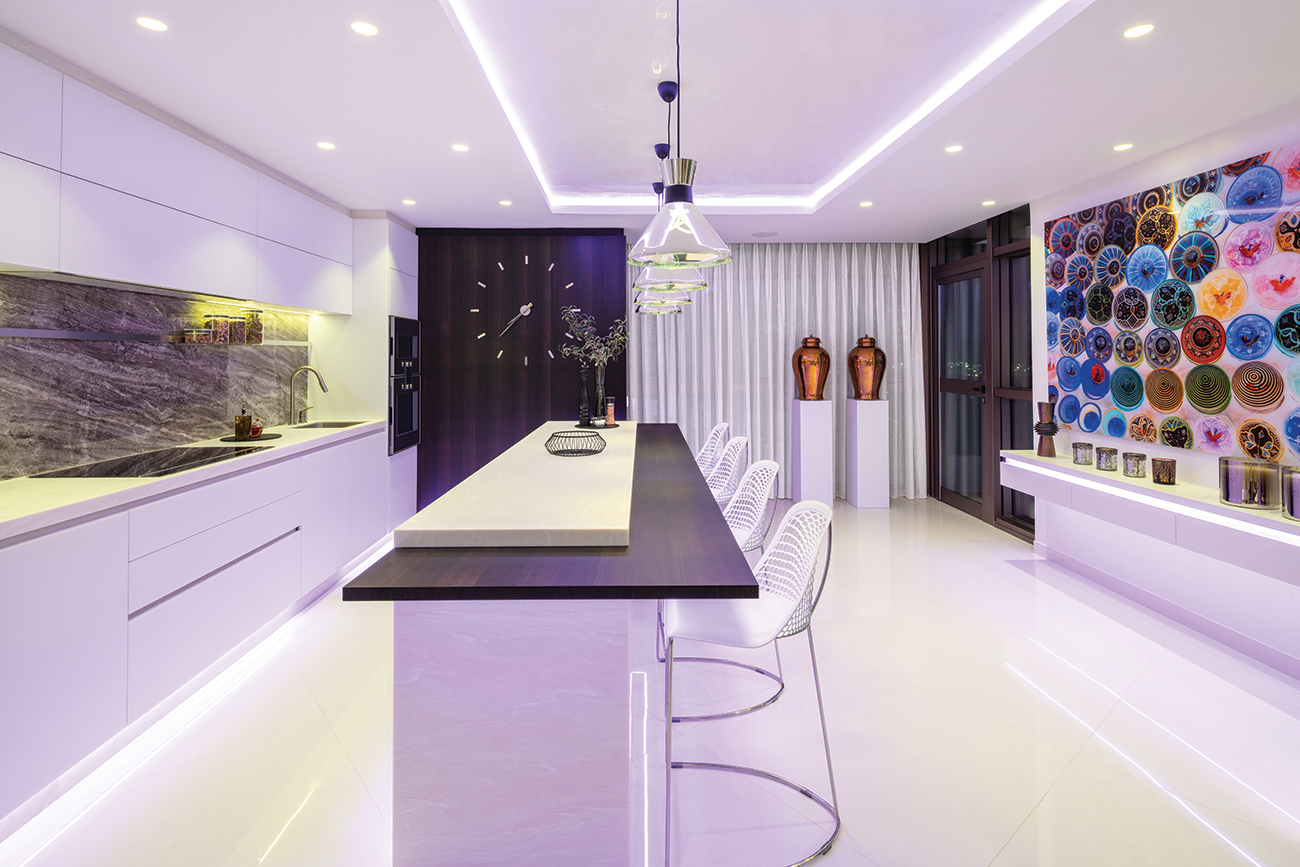 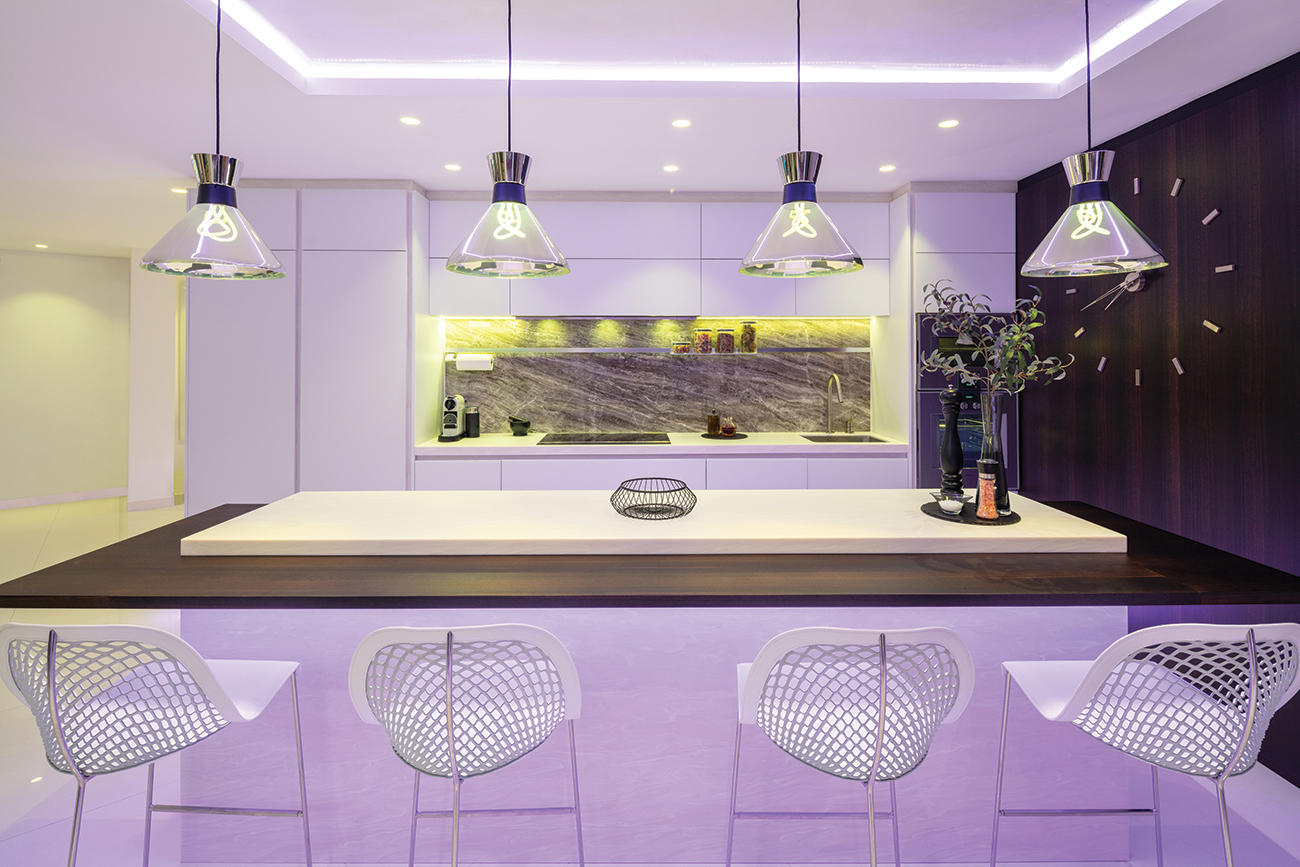 Above: Under the watchful eye of a stylish Nomon clock, the open-plan kitchen can be both casual and smart, depending on the LED scheme chosen for lighting.

To reinforce the contemporary feel, UDesign chose to flood the apartment with LED lighting. A selection of white and RGB colour schemes allows the owner to set the mood for the entire common area at the touch of a button – anything from cosy pink to disco-blue. As far as domotic solutions go, this is a masterpiece. After all, domotic software is only as good as the lighting and appliances that complement it and, in this case, there are about 200 metres of LED lighting and various lamps. The system can be programmed to slowly change from one colour scheme to another, creating a relaxing flow of coloured light throughout the entire apartment.

The common space revolves around a circular dining table with a eucalyptus top, custom-made by UDesign and clearly underlined by a burnt orange silk rug and Tom Dixon lights. The TV area is complete with an ample custom-made UDesign sofa and LED fireplace. The eucalyptus theme is continued with vertical detailing on the TV panel, in combination with large format granite tiles. The elegant wall cabinet has been custom-made by UDesign in eucalyptus and white glass, tying up the colour scheme of this part of the common area. It’s all in the details though: mystery and depth are brought to this interior with two bronze mirrors by Catellan Italia and Pulpo floor lamps.

The kitchen is open-plan and, naturally, equipped with top-level Gaggenau appliances. To achieve the level of lighting and the floating effect, the whole kitchen structure was wrapped around an LED unit. The colours and character of Morocco are brought back into the otherwise neutral space with a funky digital art piece depicting tagine tops. A very special area of this contemporary apartment is the jaima, a classical element of Berber culture. A traditional Berber desert camp would have a designated space centered around the fire or secluded by a tent, where men could congregate to discuss important business matters and smoke shisha. While the design of this jaima is far from its origins, it is clearly set up to encourage quality conversation. The porthole style Sovet Italia mirrors bring cruise liner vibes and allow someone standing in the kitchen to see the boats entering the port. 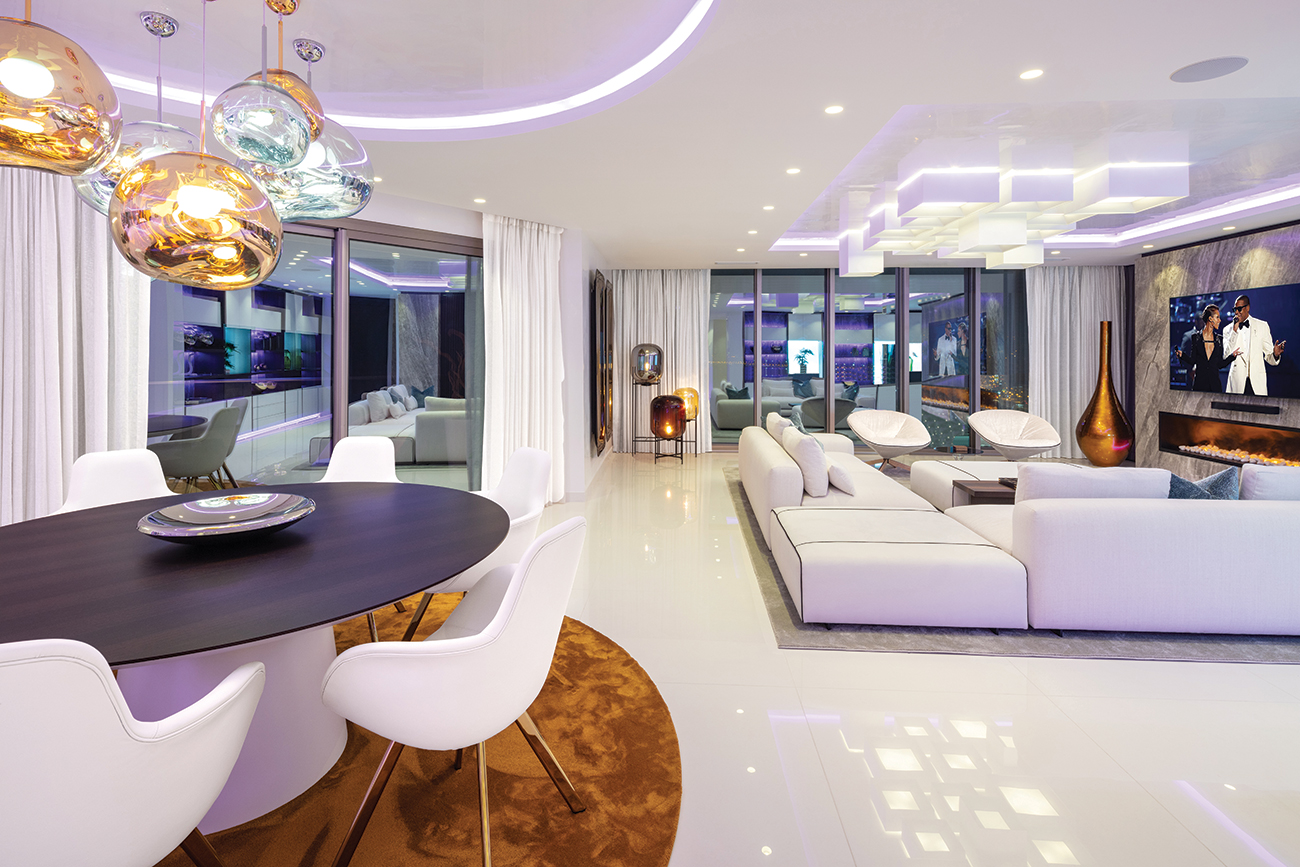 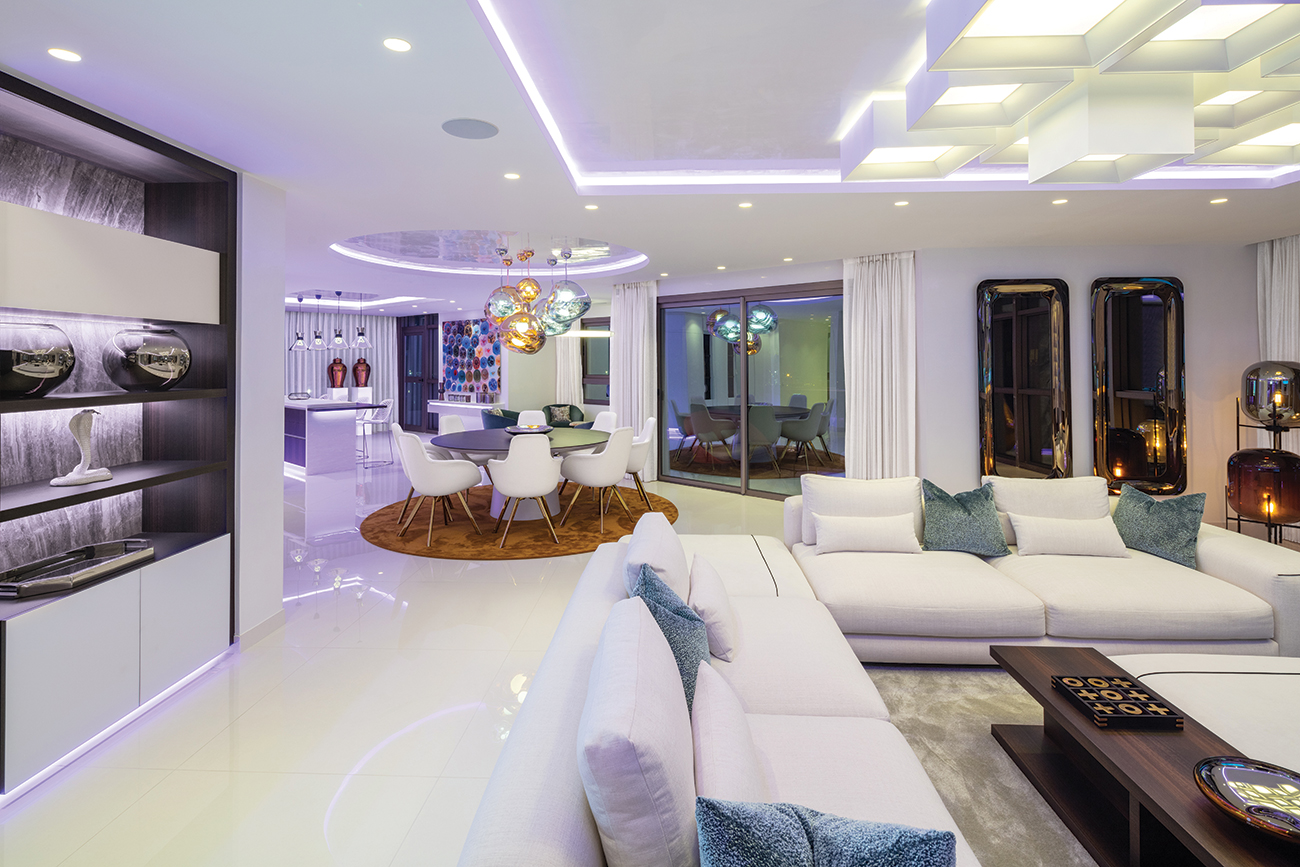 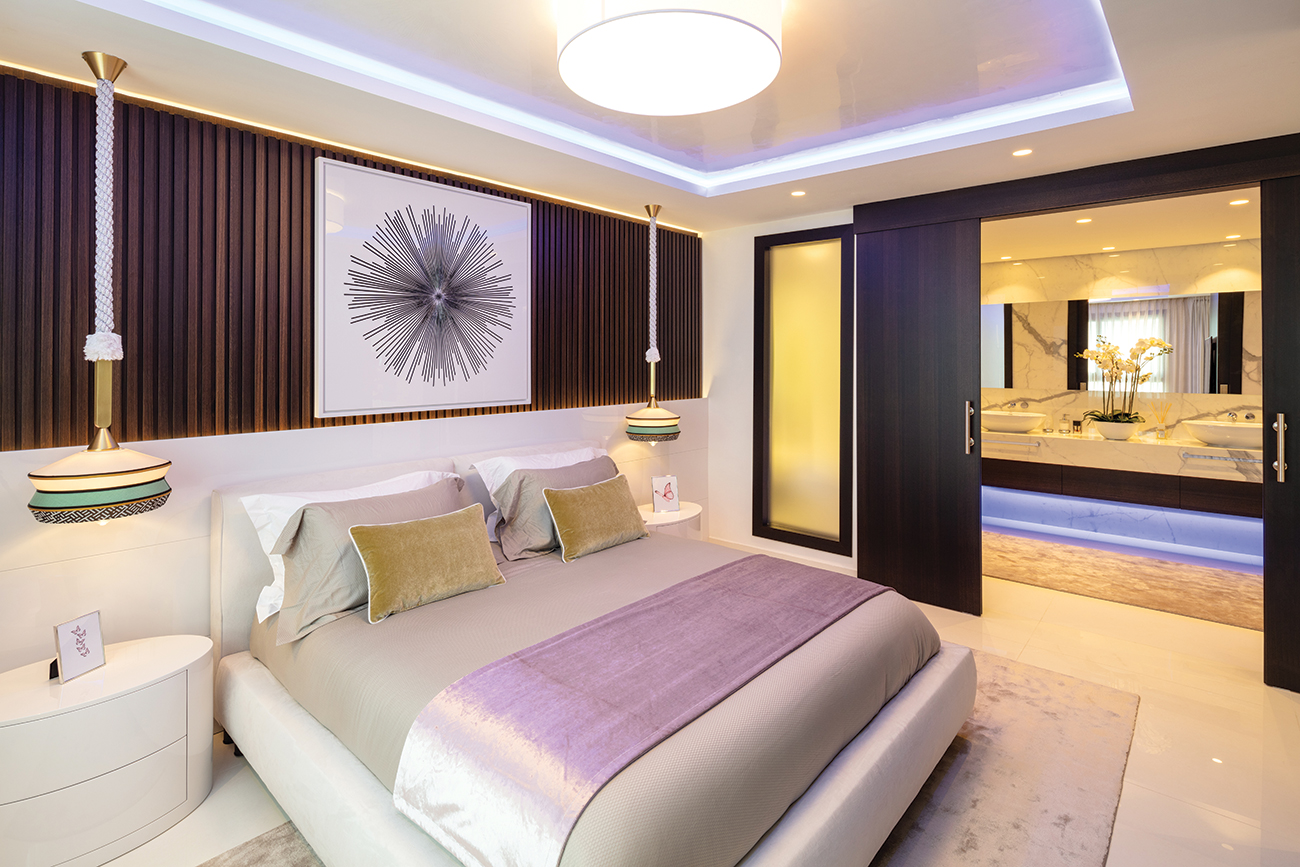 Above: The grooved eucalyptus wooden panel above the sumptuous master bed has integrated LED lights, just in case you feel like adding a twist to your alarm clock routine.

While all the common areas of the apartment encourage one to roam free and socialise, the master suite is an oasis of privacy and quiet. Consisting of a lounge, walk-in wardrobe, bathroom and bedroom itself, it’s broken down into areas by a smoked eucalyptus panel holding the TV and the LED fireplace. The bed is custom-made by UDesign from off-white Nobu leather, with a Moroccan touch added by the multi-coloured Contardi pendant lamps. The two guest bedrooms are designed in simple and fresh Mediterranean tones, both complete with the legendary Caadre mirror designed by Philippe Starck for Fiam Italia. 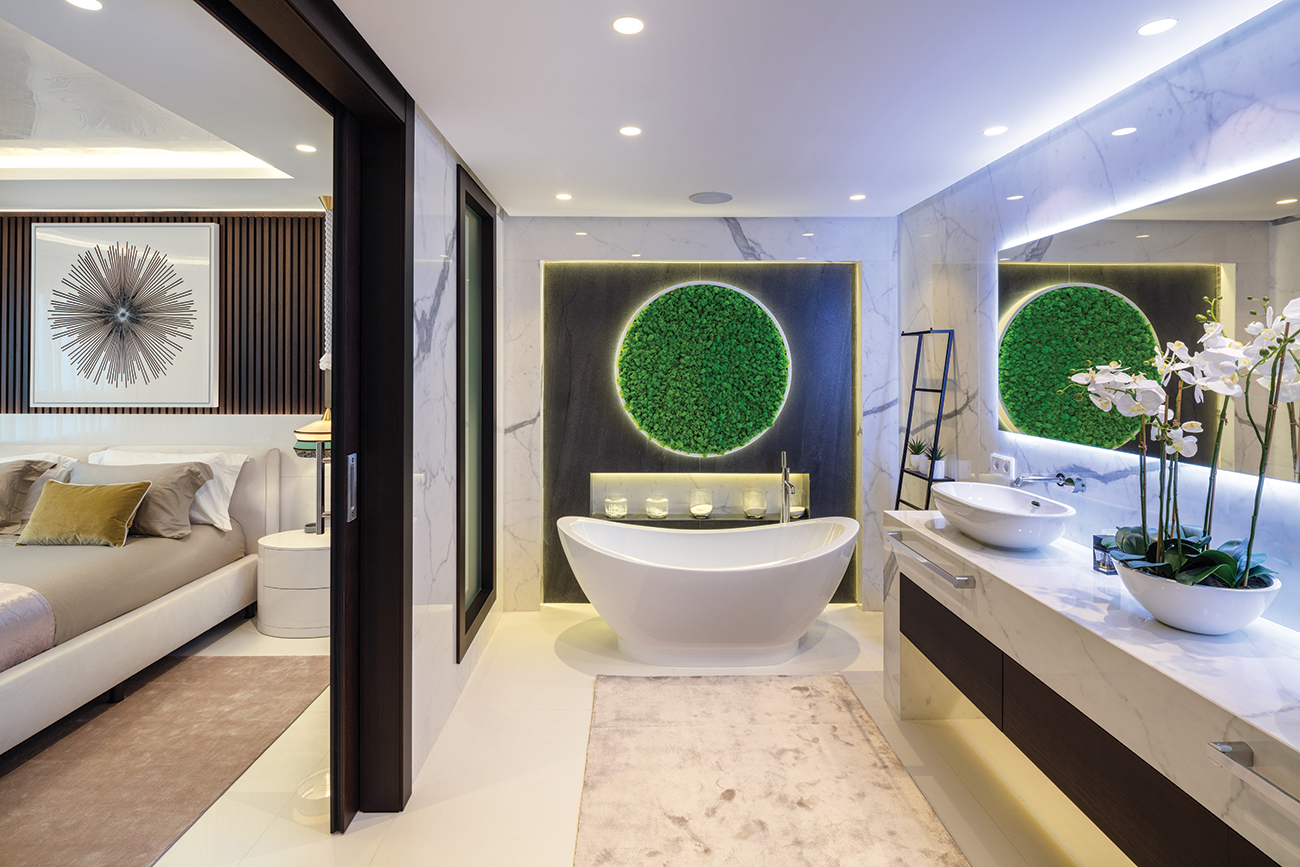 Above: Finished in Calacatta marble tiles, the bathroom has a striking colour accent in the form of an LED backlit moss sculpture by UDesign. 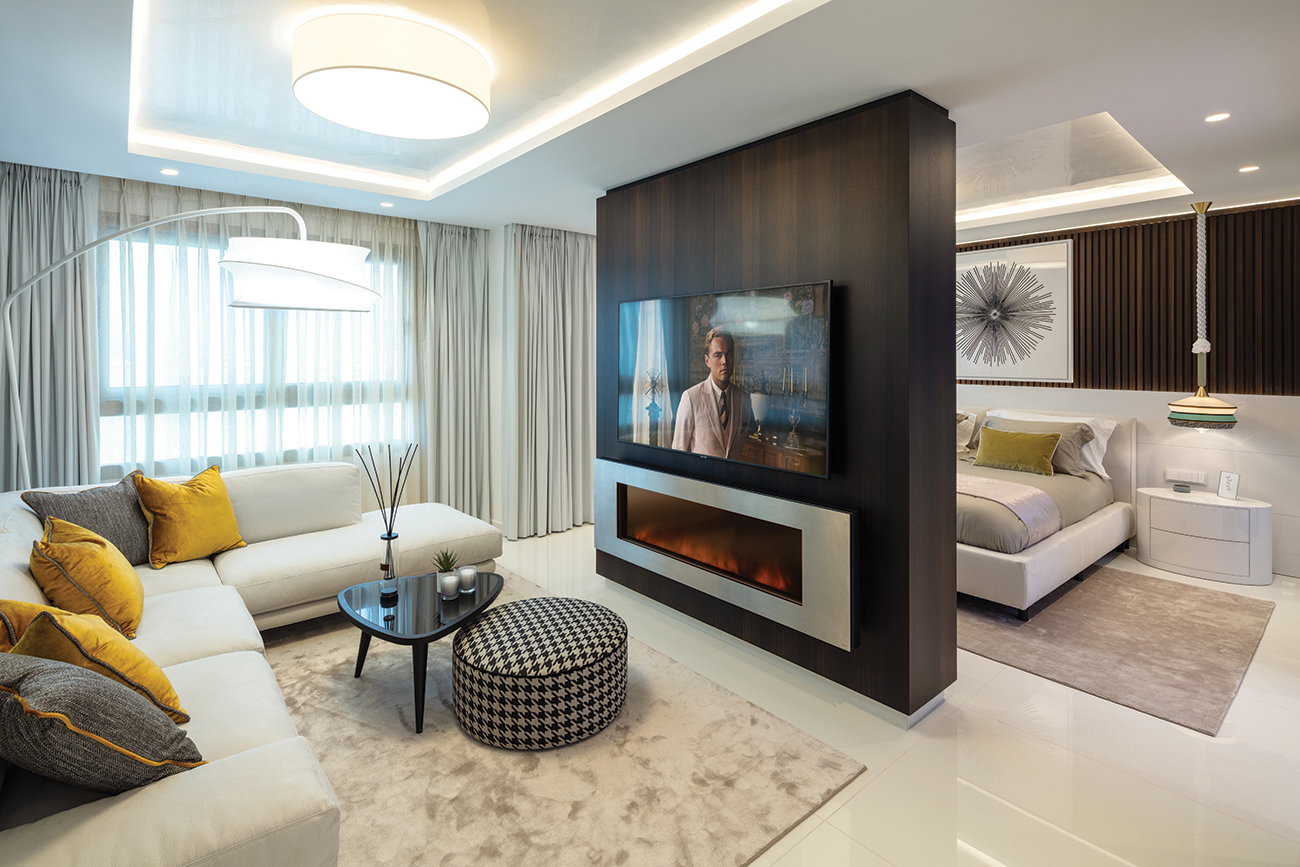 Above: The lounge area of the suite. The central column that separates the space has a screen on both sides. 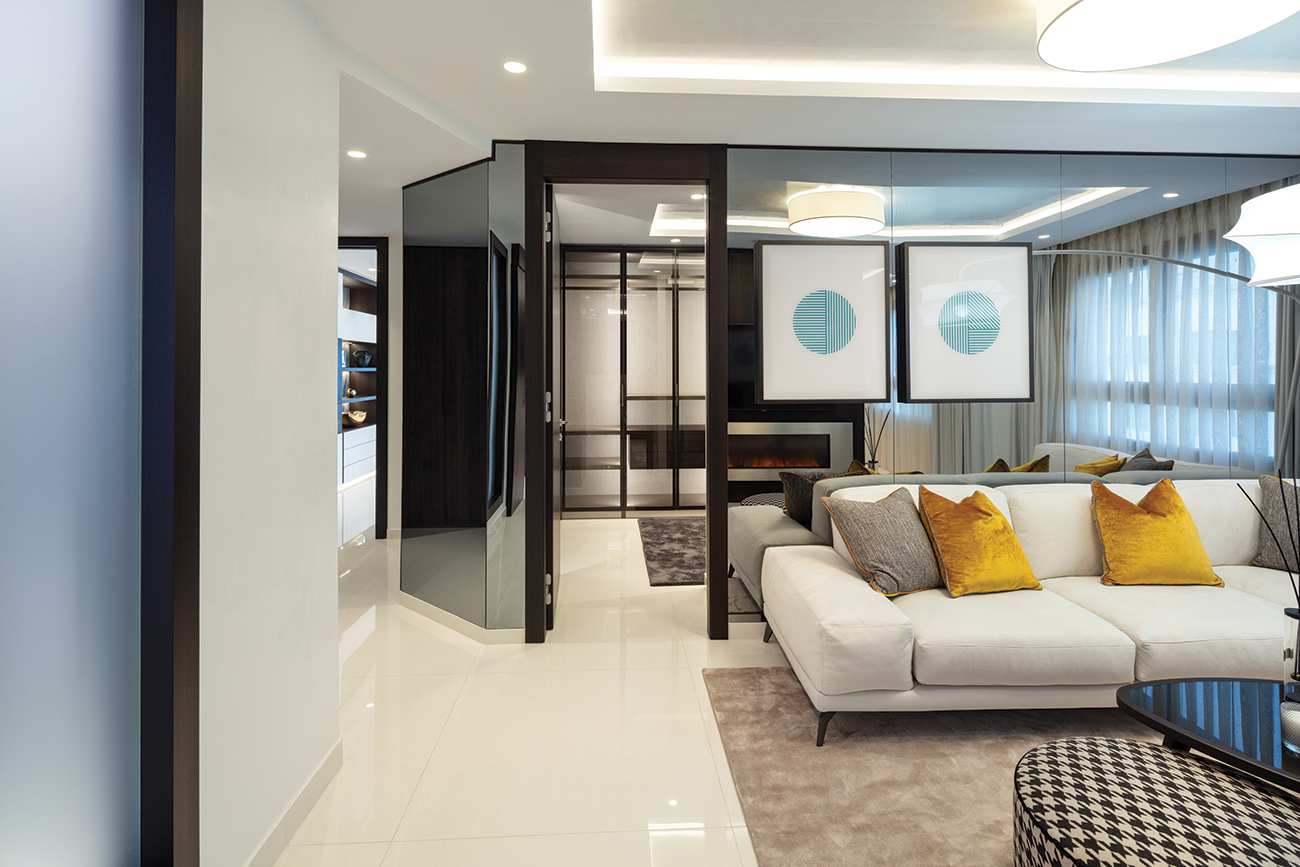 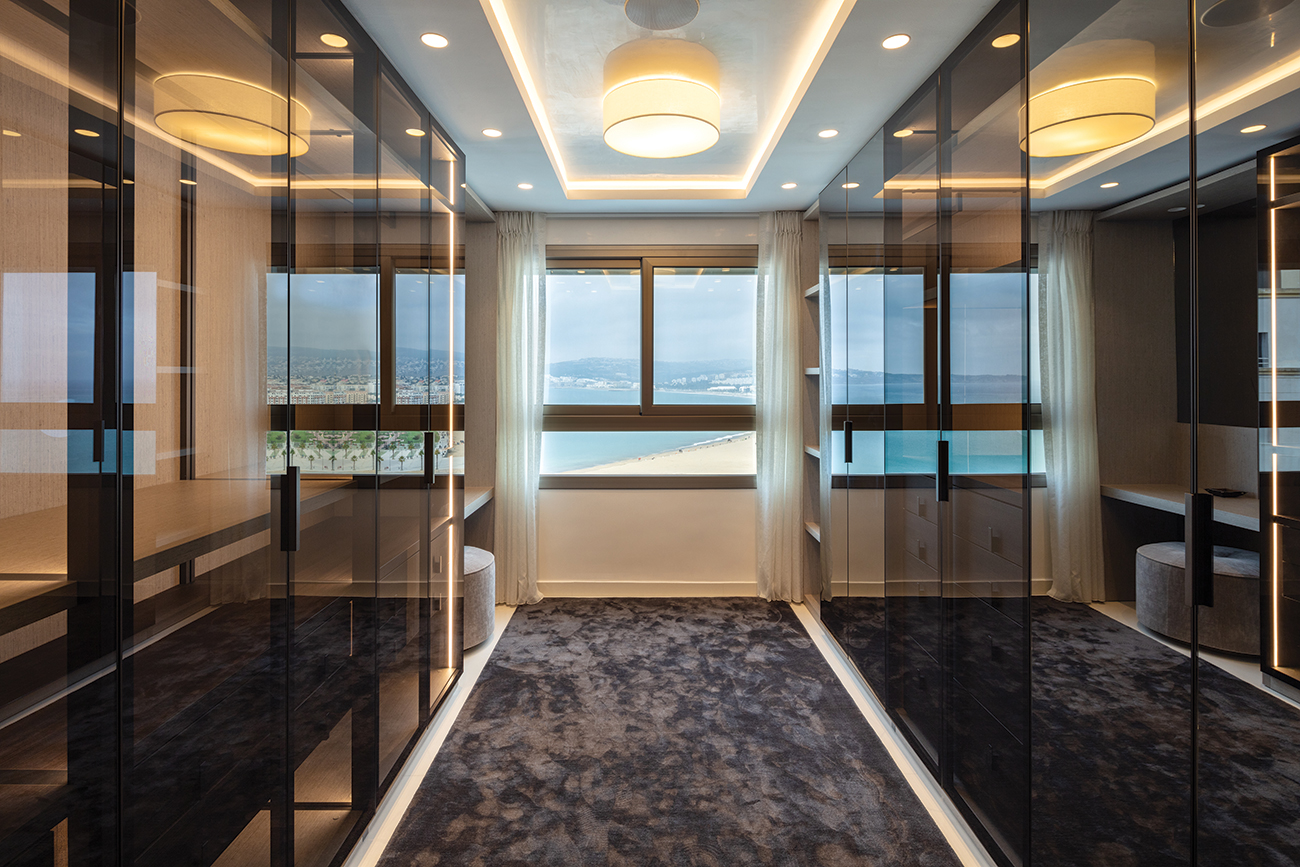 Above: Walk-in wardrobe in smoked glass. At the end of the wardrobe there is a vanity unit and stool right by the window with views across the bay. 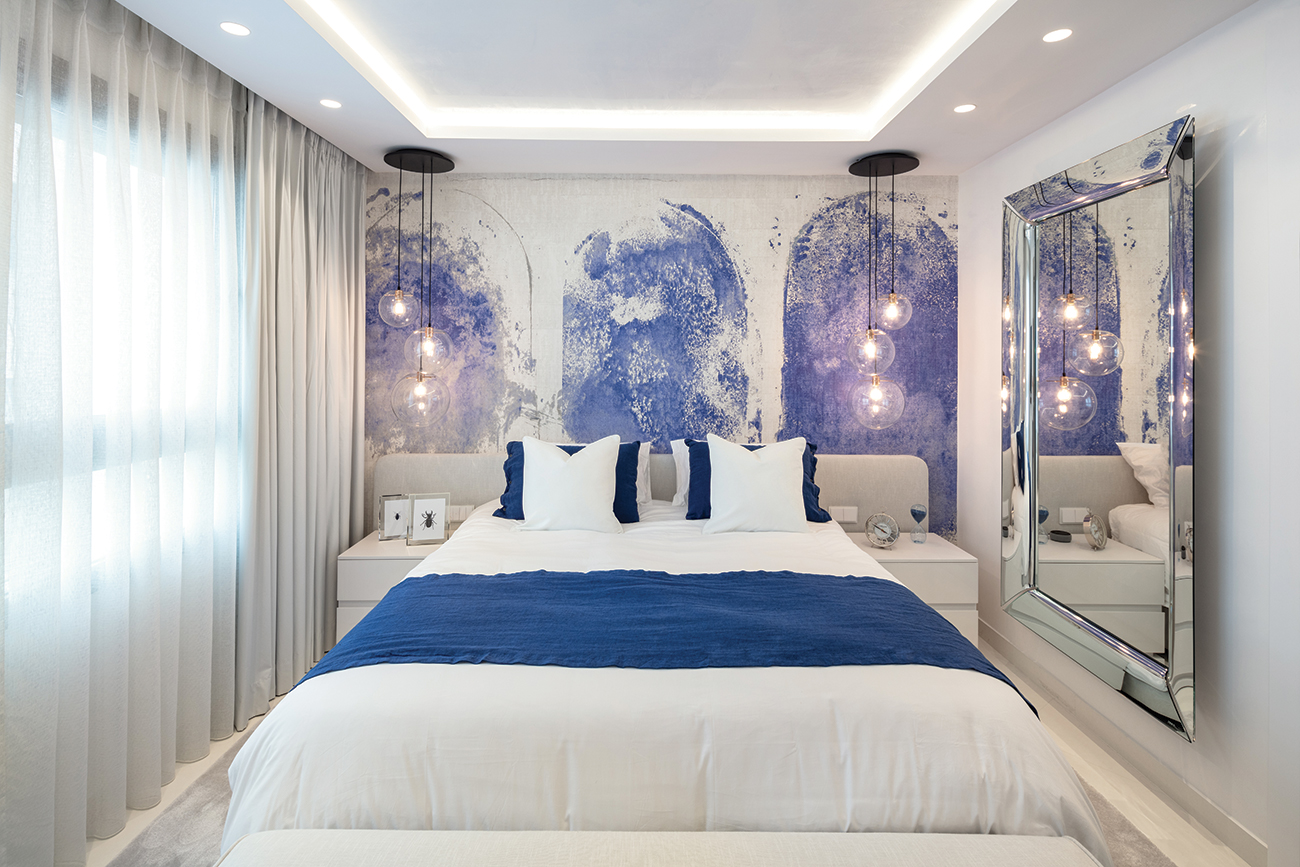 Above: Picking up the Moroccan flavour of the rest of the apartment, the guest bedrooms are visually amplified by the legendary Caadre mirrors designed by Philippe Starck for Fiam Italia.

Over the last hundred years, Tangier became a destination for many European and American diplomats, spies, writers, artists and businessmen. Like any city with substantial history, it attracts both opportunists and romantics, and holds within it many different moods. UDesign has reinvented this apartment to reflect this diversity and preserve Moroccan and Mediterranean heritage while creating a modern and bright home.

UDesign’s in-house visual artists create very realistic and highly detailed 3D renderings. During the interior design process of this Tangier apartment, the client was shown 3D renders of the finished design for their approval. As you can see from the renderings and real photographs below, it’s pretty difficult to tell the two apart. Answers at the bottom of the page. No peeking!

Which image is a 3D rendering and which is a photograph? 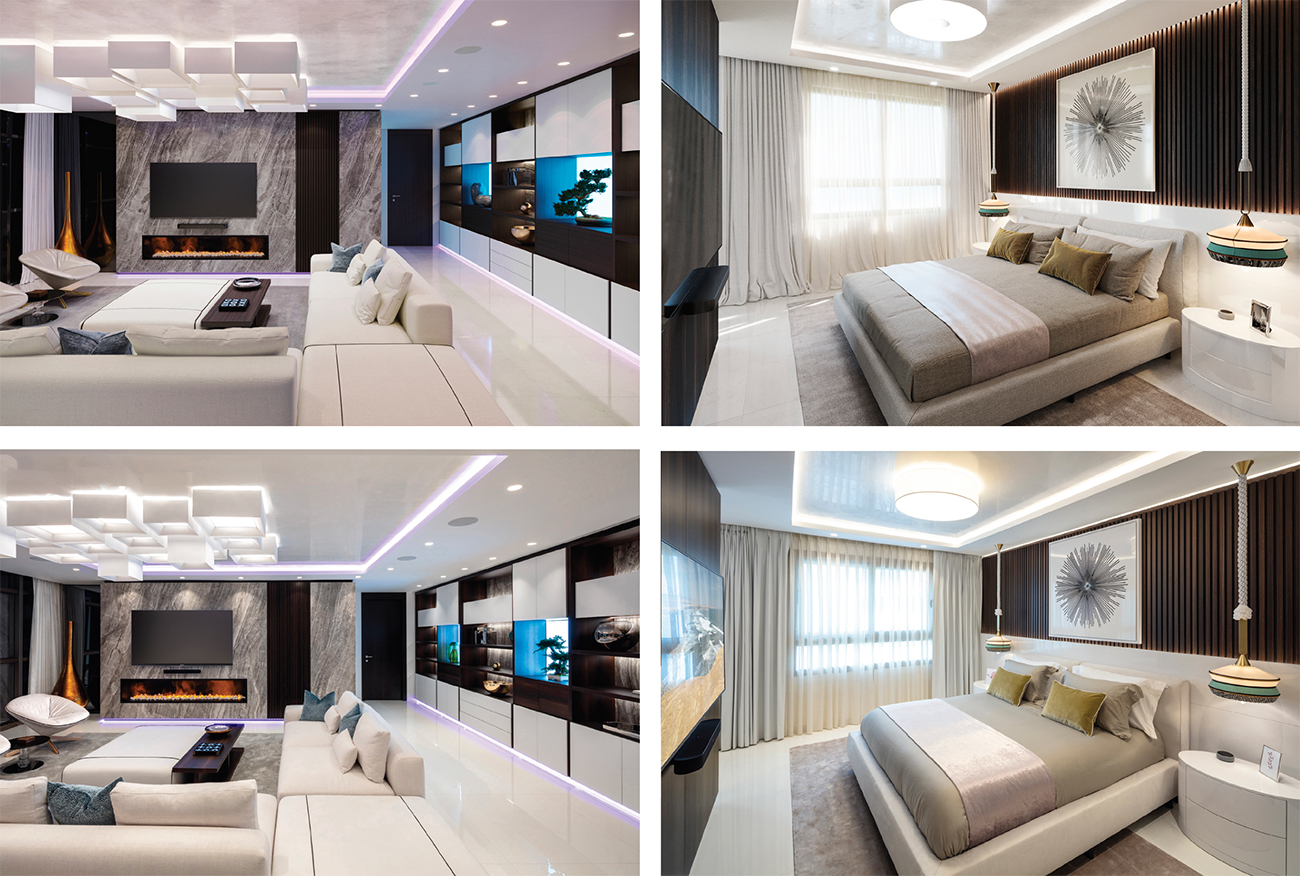 Both images on top are renderings