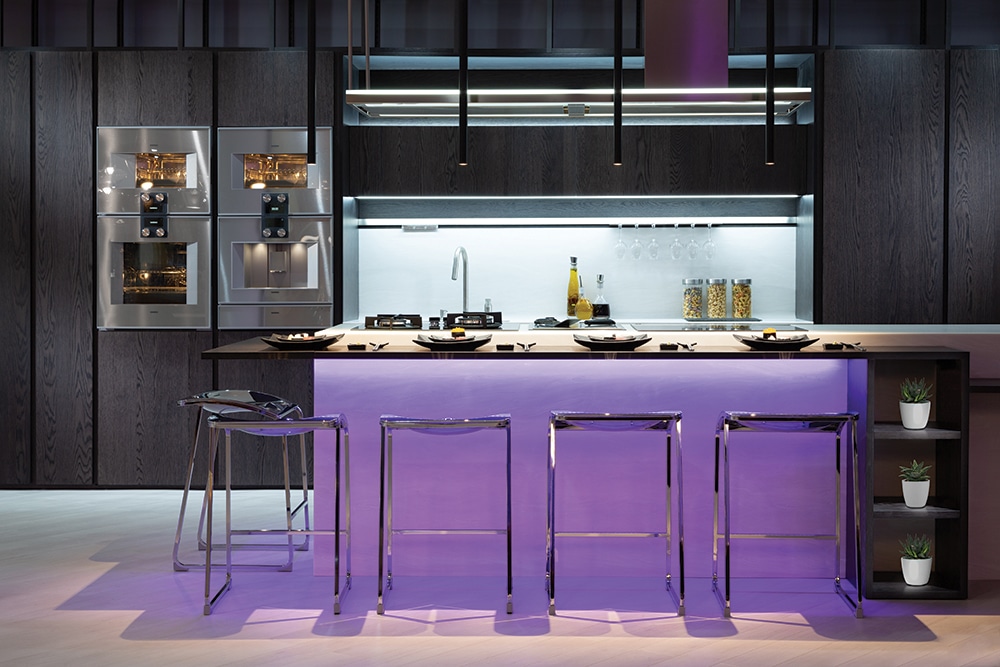 Today’s kitchen has to be beautiful, welcoming, user-friendly and the perfect blend of form and function. And the seven kitchens we feature here are just that: places for all the family, at any time of the day or night.

A kitchen and its cook are like an old married couple: they’ve long forgotten why they love each other, but they do, and in any case, they never had any need to ask themselves why in the first place. 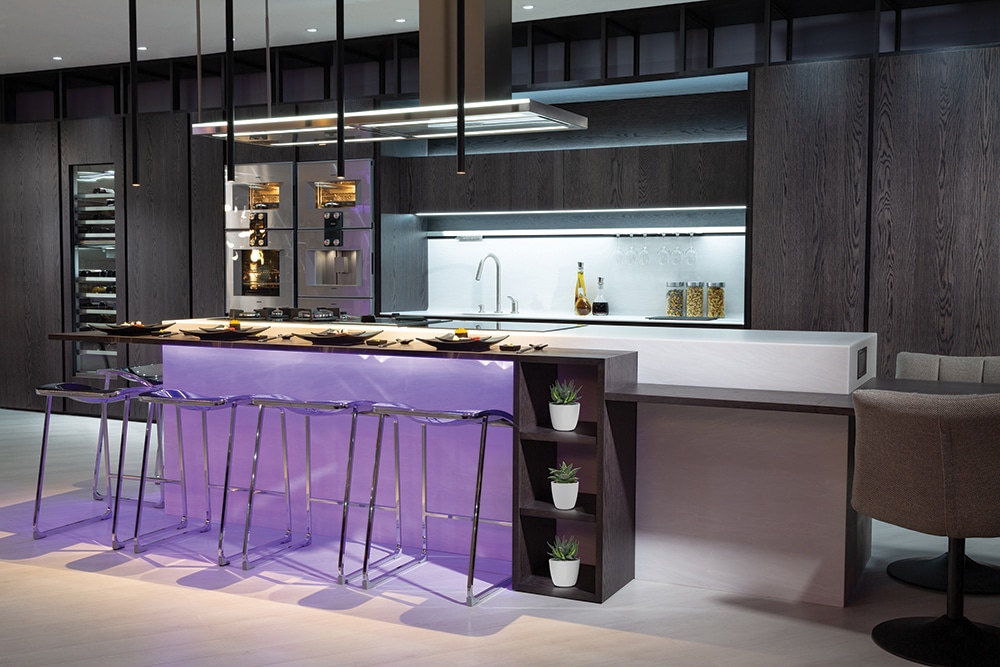 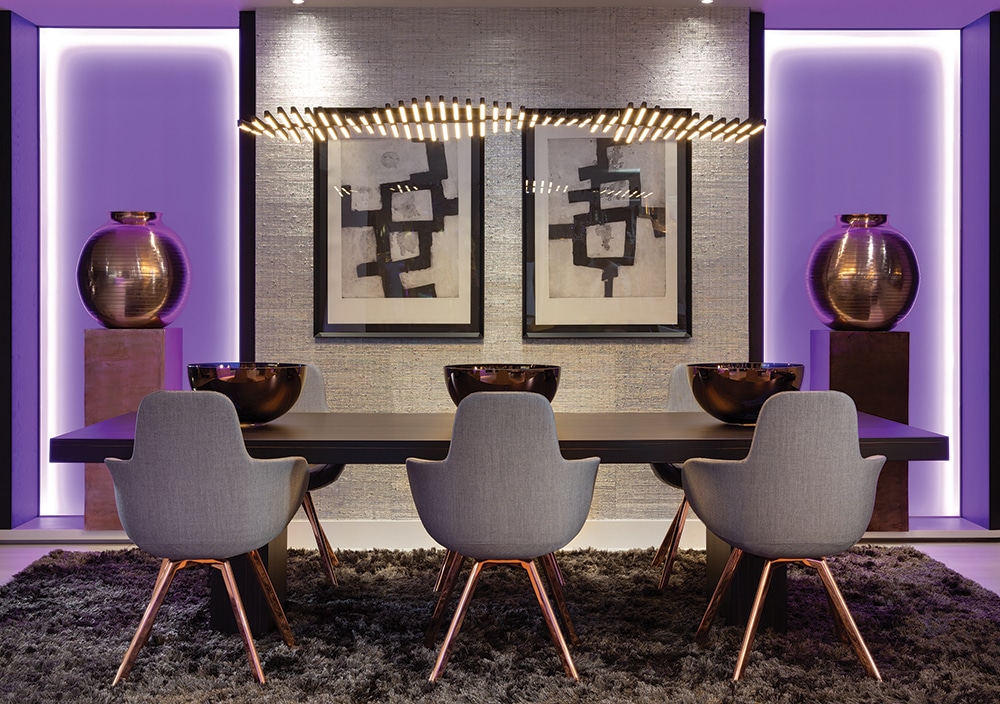 Above: The Snazzy Kitchen. If you’re lucky enough to be in Marbella you can see this snazzy kitchen for yourself in UDesign’s showroom.

That is, of course, if the kitchen was well designed in the first place, and if it suited, and continues to suit, the needs of its user. A kitchen may be many things to many different people, but it’s certainly the heart of the home and definitely much more than just a place to cook.

The kitchen began to be used as more than a cooking room in the 18th and 19th centuries with the invention of the kitchen stove, and more importantly, its chimney. While still usually separate from the dining room, it became the informal gathering place for the servants in a big house and for the entire family in the homes of the non-titled masses. 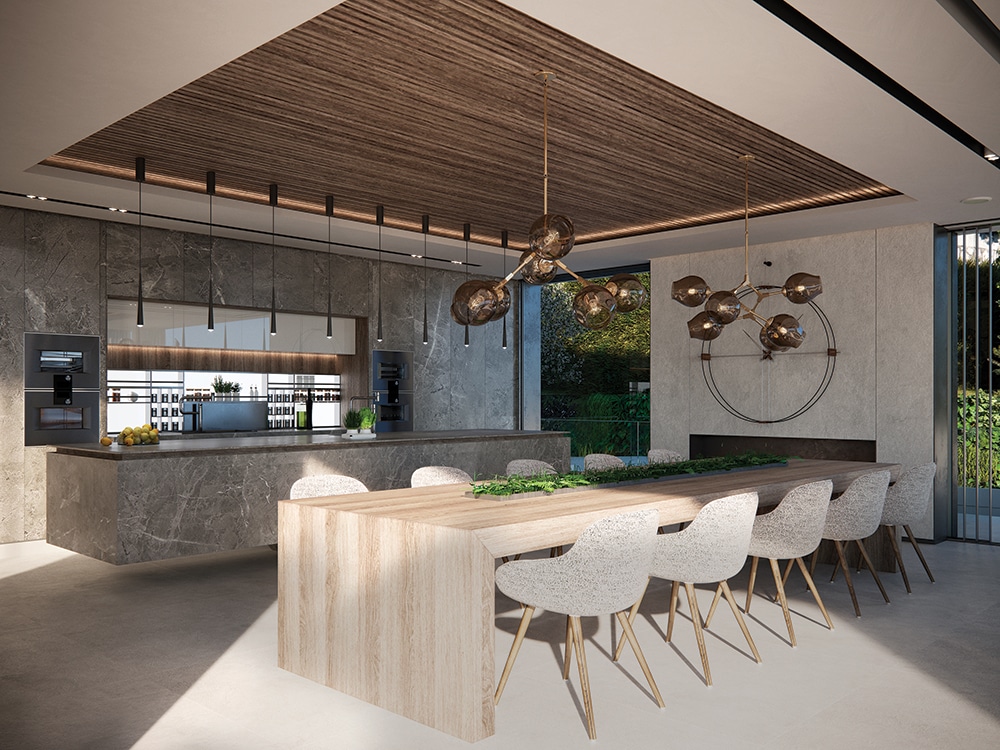 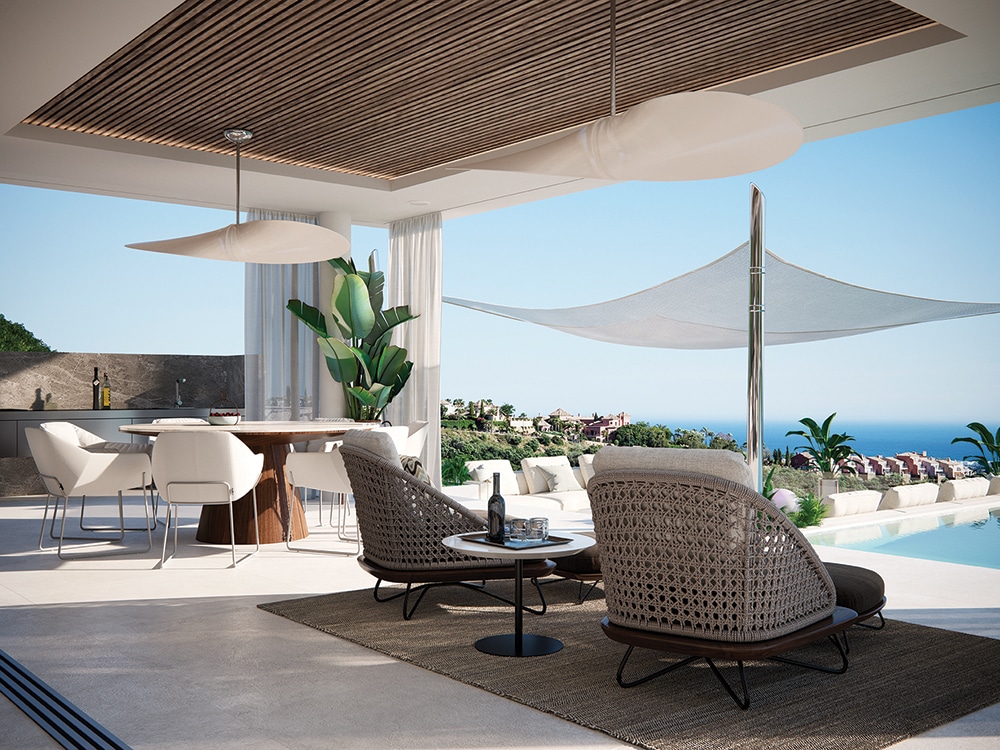 Above: The Fusion Kitchen. Elegant minimalism, with the high wooden ceiling drawing the design together. The window slides open to allow access to the vertical kitchen garden.

With the widespread use of the extractor hood in the latter part of the 20th century, kitchens began to open out into dining rooms first, and then sitting rooms, and there is hardly a kitchen anywhere in the developed world these days that one cannot comfortably eat in. Today’s well-designed kitchen has become the heart of the home: office, entertainment space, breakfast bar, lounge, dining room and – no surprise – a place for cooking in.

“You’ll always find me in the kitchen at parties”. Those of us of a certain age will remember the lyrics of this witty song, but looking back at the video, one sees Jona Lewie dance his way across a number of beautiful kitchens, all very modern and a party going on in each. Then he opens a kitchen drawer and out pops an electronic keyboard. He wasn’t far off the mark. 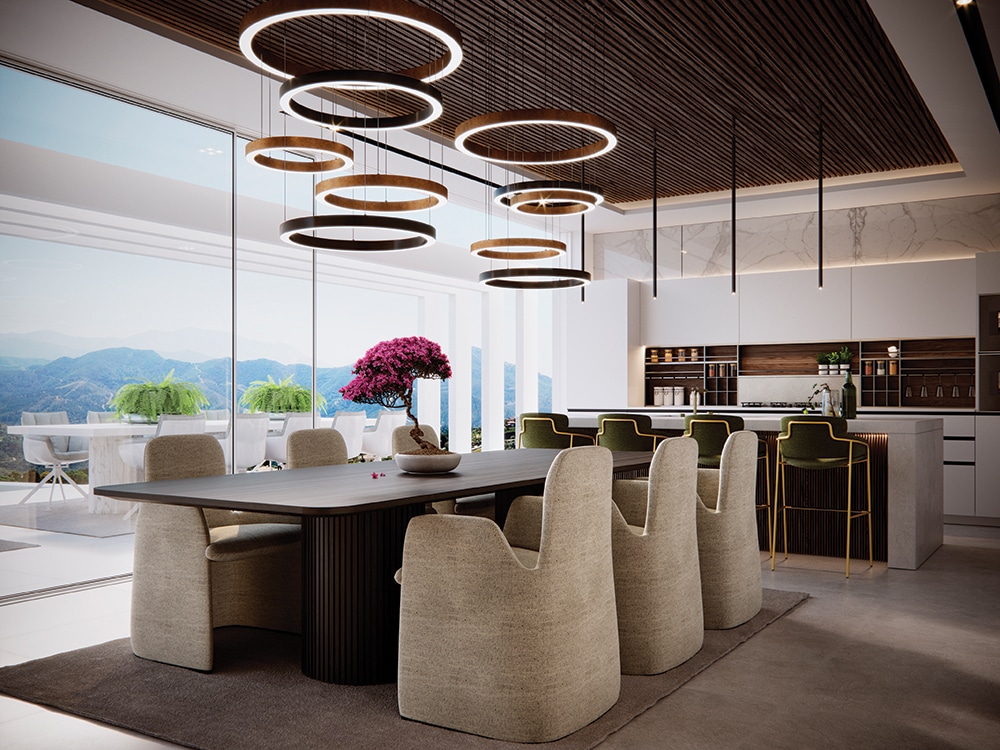 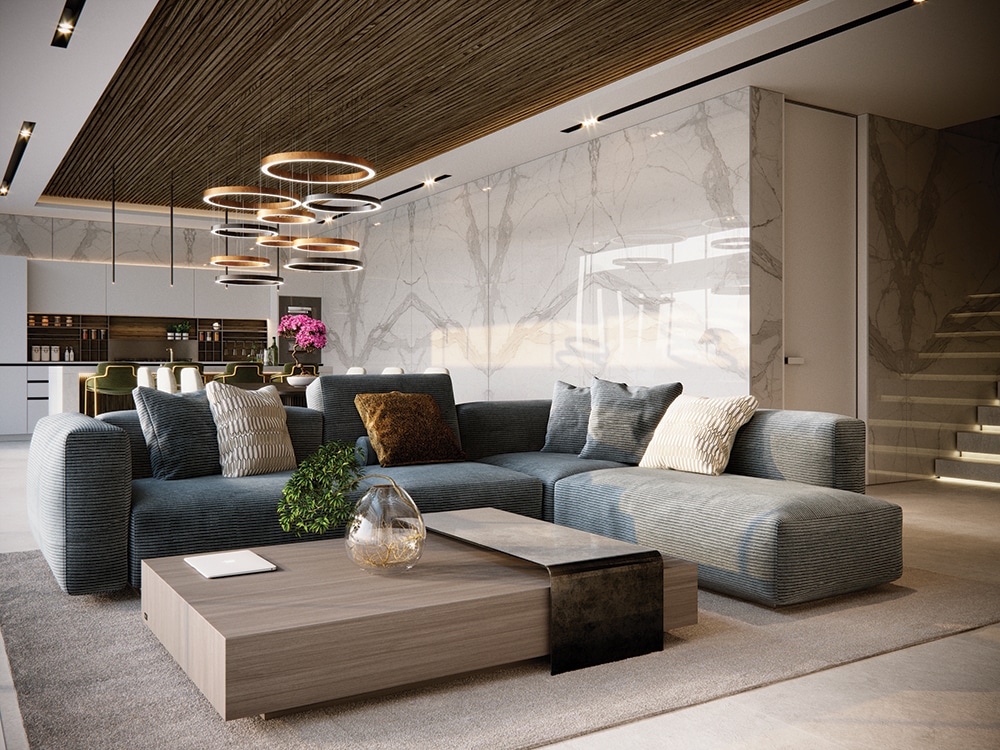 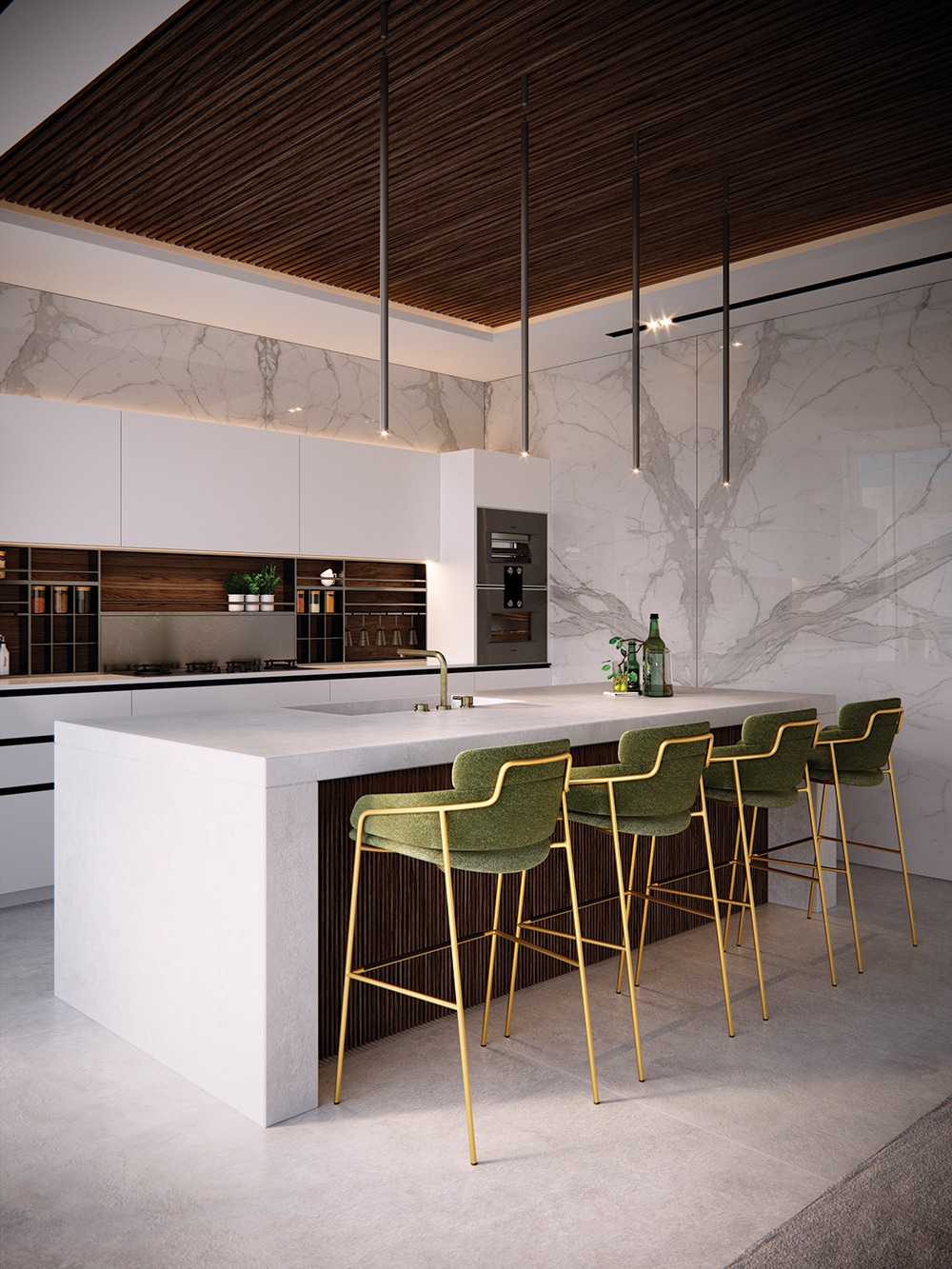 Above: The Mediterranean Kitchen. The essential luxury dining room kitchen, with four different seating areas for different occasions and times of the day.

Modern kitchens are packed with electronic gadgetry, most of it hidden, thankfully, and much of it used once in a blue moon. But it’s there when we want it, one hears the homeowner scream, so let’s not dwell on that expensive microwave oven that does everything we don’t want and that we all use for heating up cold coffee. Or the fancy dishwasher used mainly for storing dirty dishes.

Like it or not (and most of us love it!), the appliances are here to stay, many of them beautiful works of design in themselves that should never be hidden from view. And some are so hidden you cannot see them at all: the hotspots now being built into new kitchen countertops, for example, where you simply put your phone down to be charged, without cables or sockets. 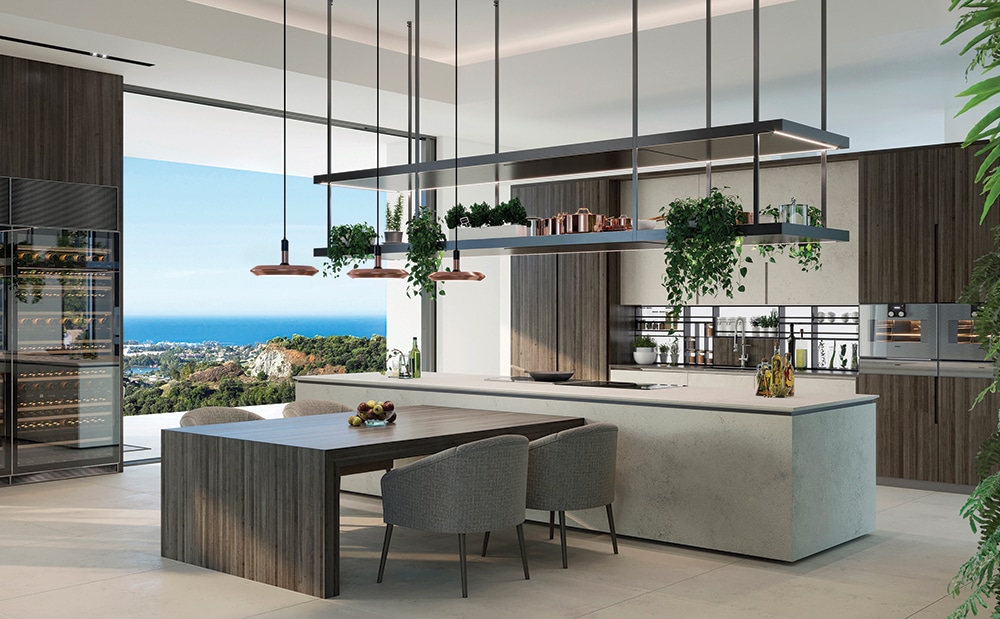 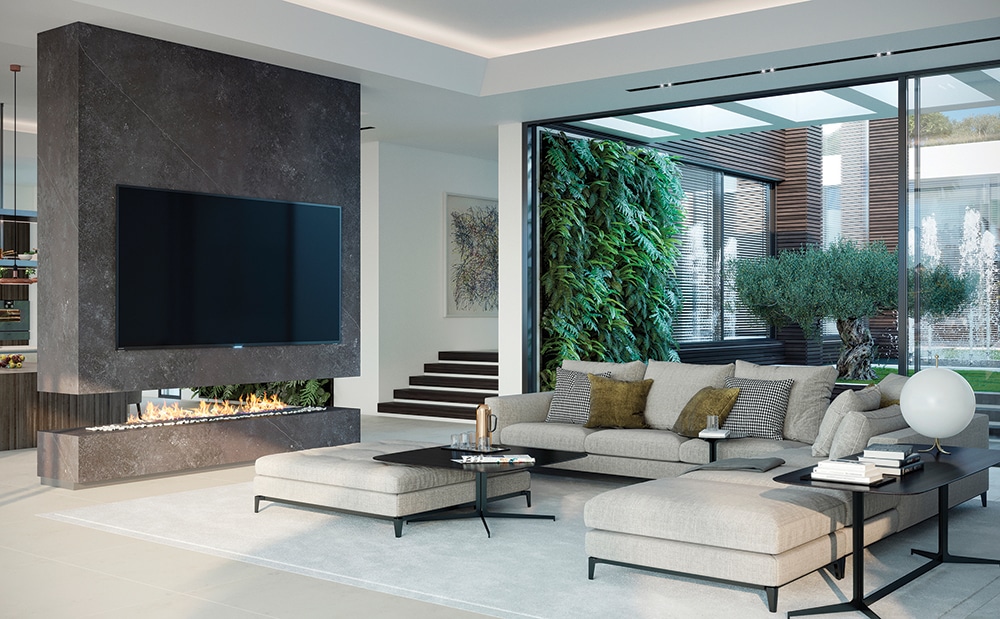 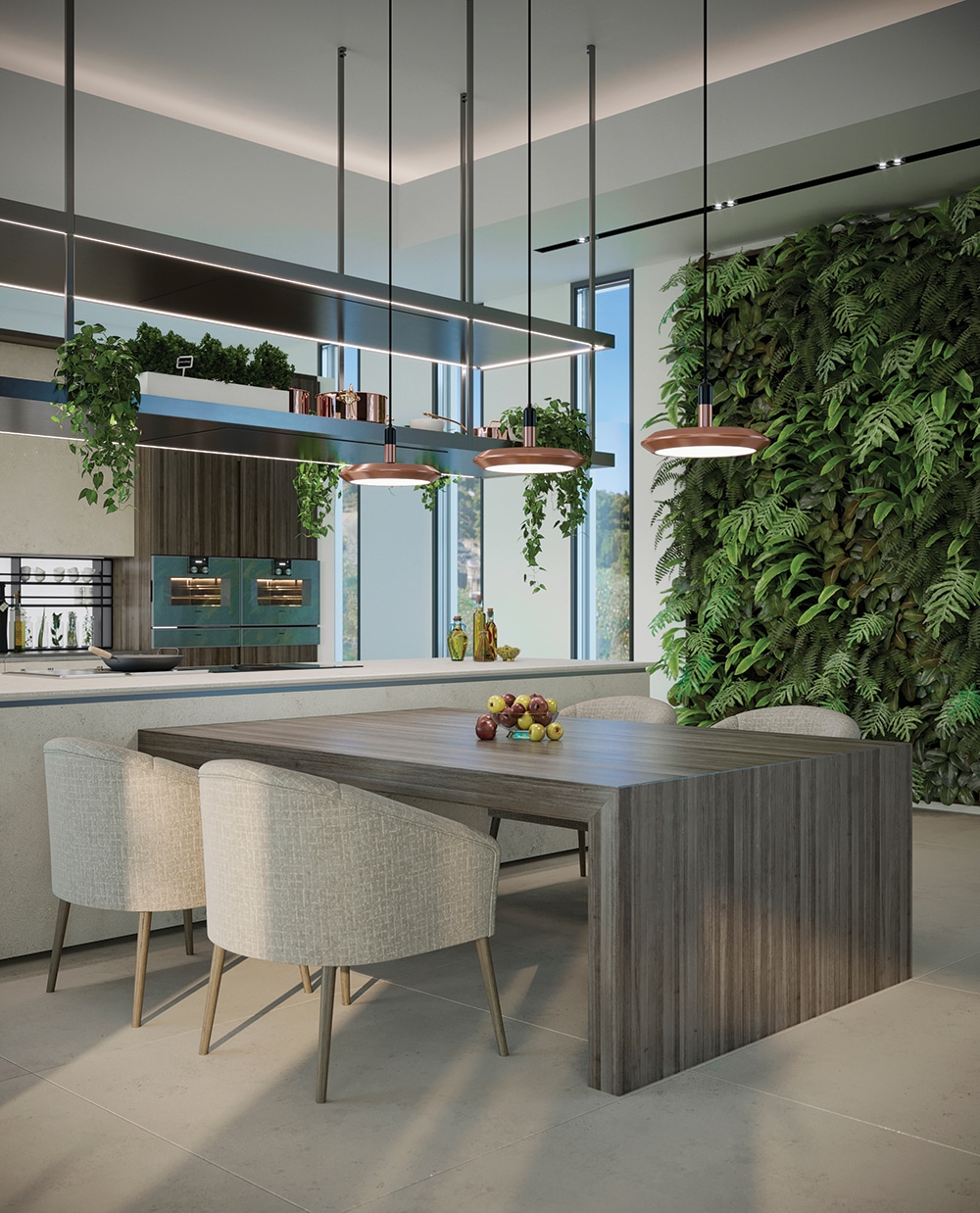 Above: The ECO Kitchen. The vertical garden brings the outside in and the overhanging herb garden provides the essence of flavour at arm’s reach. This is ecology in action, where the flow to the living area makes cooking a shared experience.

The new Scandi open-plan kitchen design concept may seem easy – leave out a wall or two – but it’s not. In the kitchen as a kitchen, the golden rule (known as the Golden Triangle, in fact) was to keep the most-used areas close enough together to make work easy. This meant the sink, stove and fridge could not be much further than arm’s length from each other, thus the triangle. Opening up the kitchen into the living and/or dining room, or in warm climates, into the terrace, presents its own interior design challenges. The necessary flow now flows further, and anybody who has ever prepared and cooked a meal for more than half a dozen people at a dinner party will appreciate flow. After all, the whole point of the new kitchen design is that the party is in the kitchen, just like the song says. And the whole point of clever and thoughtful kitchen design is that nobody is in anybody else’s way. 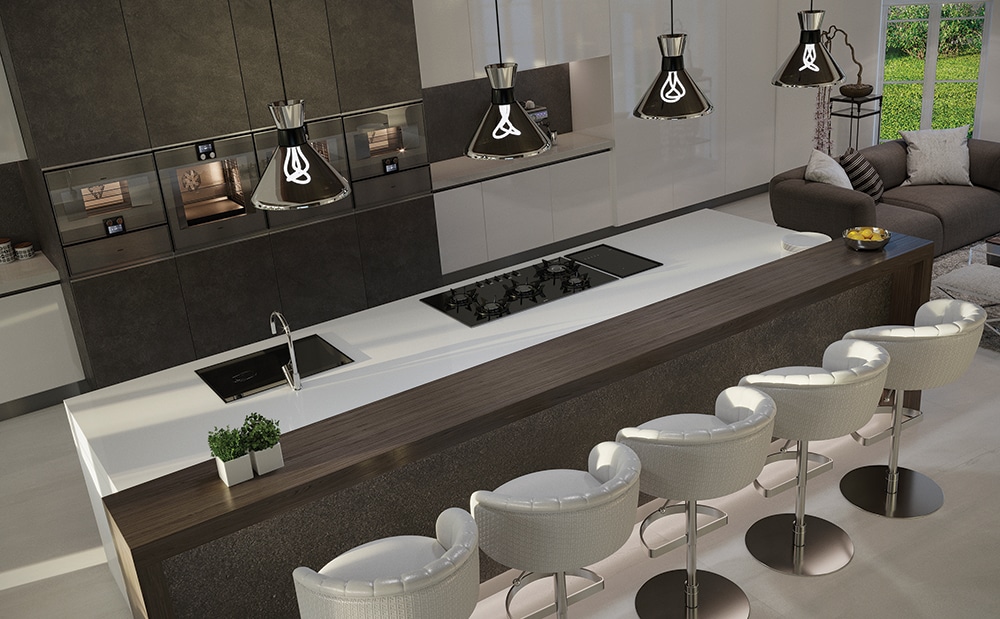 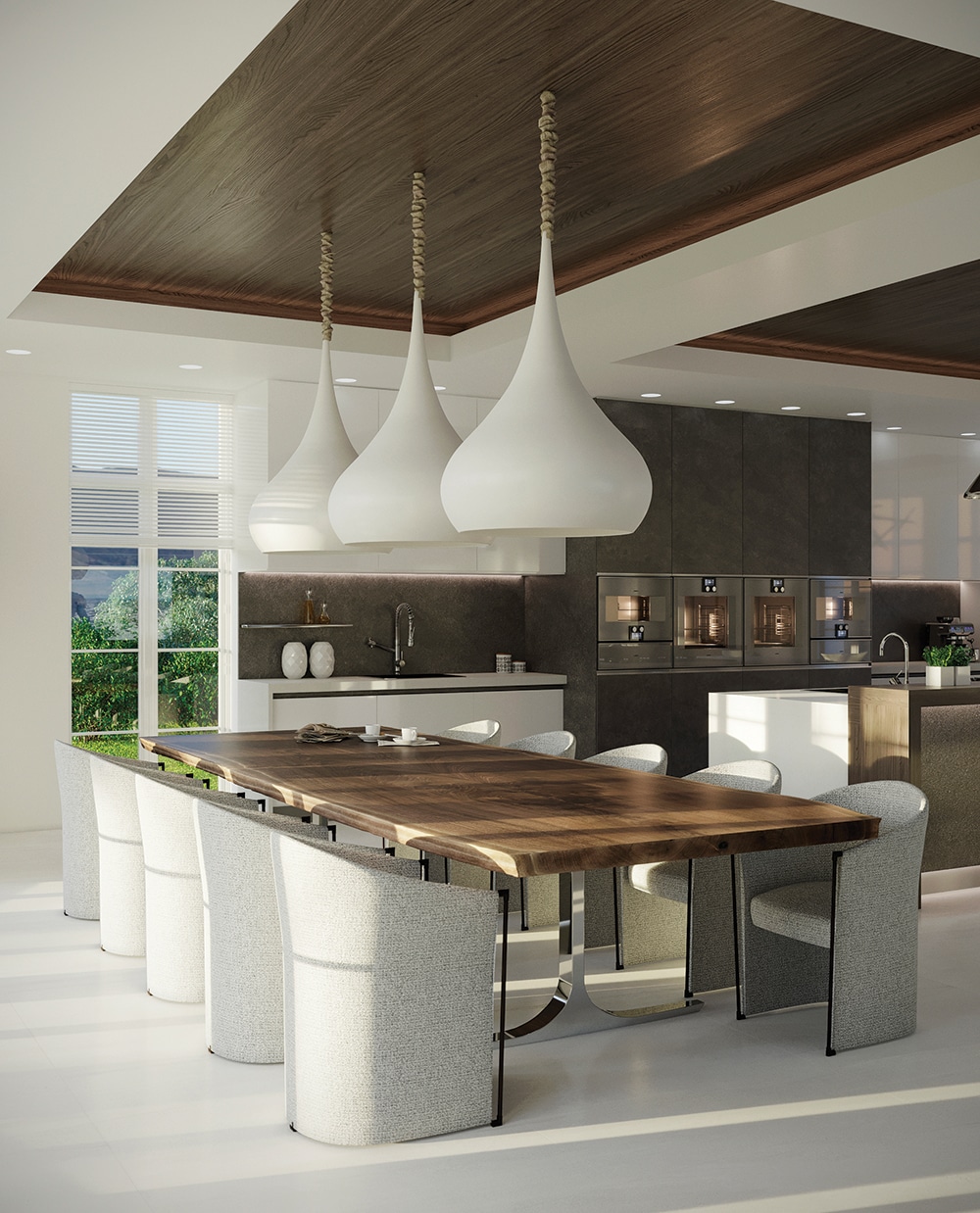 Above: The American Kitchen. Ample seating with the entire living, dining and cooking areas all in one. This beautifully designed kitchen is form and function in perfect harmony.

The designer now has to consider the lounge, dining room and kitchen as a single multi-purpose space, and has to accommodate all the special needs of a good kitchen into the overall design. Functionality, practicality and personal taste have to come together as one, and that can be a daunting task.

For those of us lucky enough to live in a warm climate, the party may be on the terrace, and nobody wants to miss it. They don’t have to. Many well-designed kitchens now allow for free flow to the terrace, and whether cooking teppanyaki style inside or on a traditional western barbecue outside, part of the kitchen is almost part of the terrace. 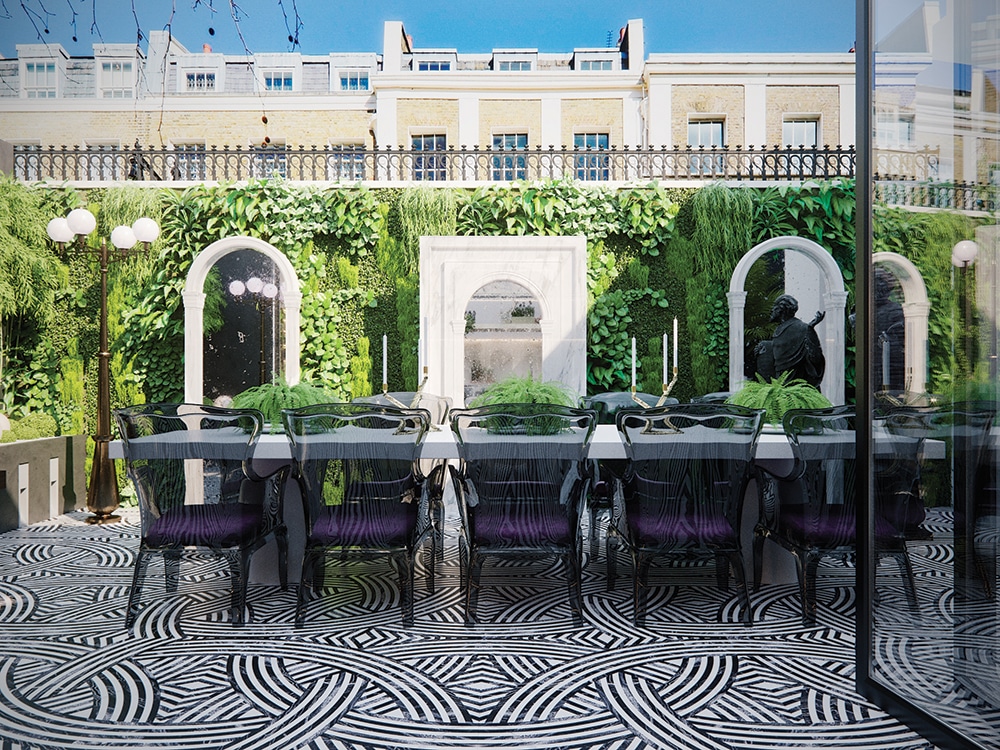 Above: With space at a premium in Belgravia, this vertical kitchen garden wall around the terrace is a beautiful and creative solution.

Then you have the kitchen garden, once, thoughtlessly, a trudge through the mud if it rained to a plot of land about the same distance as the nearest supermarket, which made one think twice about which trip was less painful. Now, no dream kitchen is absolutely complete without its own organic garden, usually, if climate allows, small-walled with limes, lemons, oranges and herbs, and all right beside the kitchen. Some go a step further, whether for reasons of space or aesthetics, and build a vertical garden in the kitchen itself. 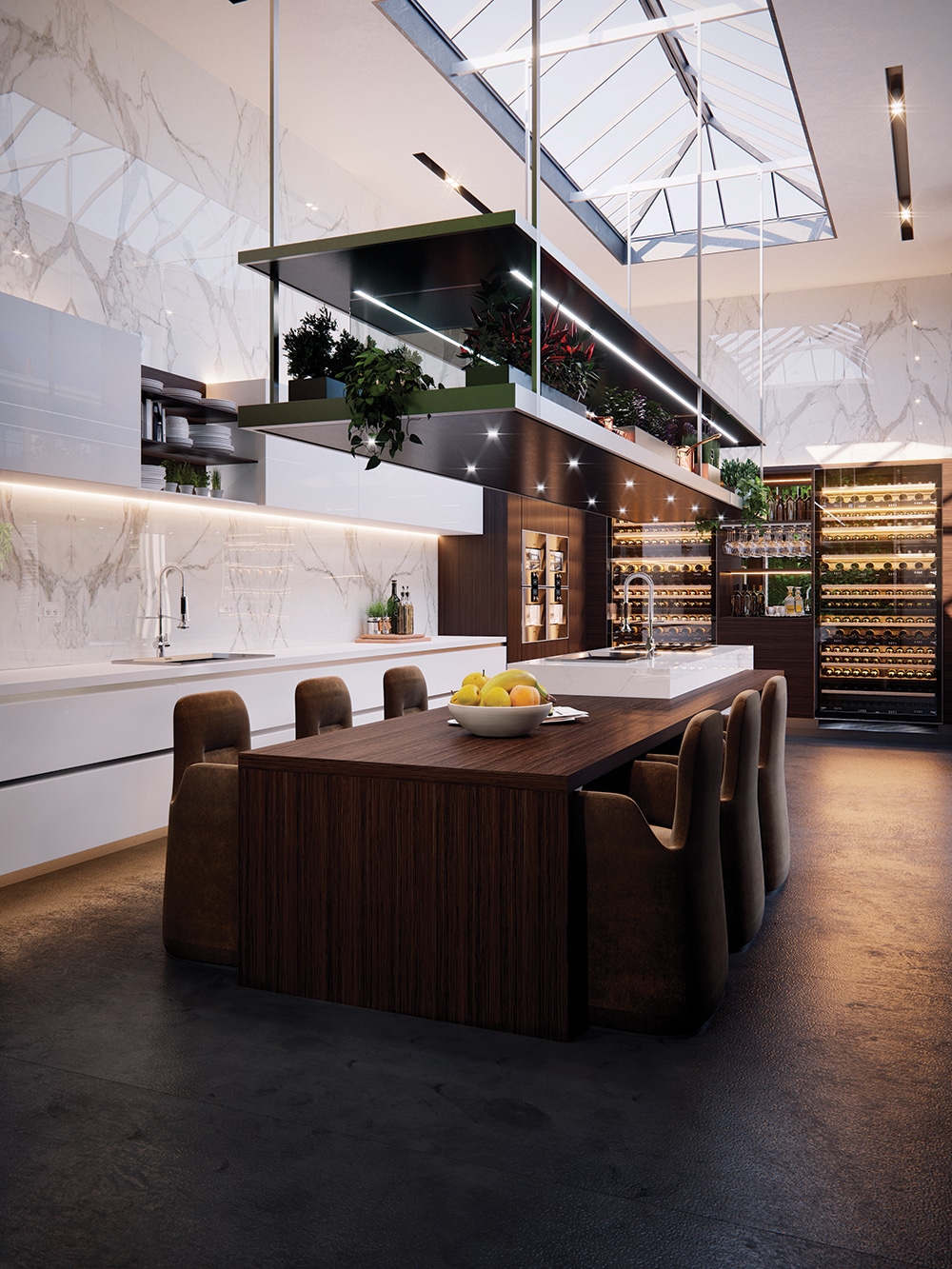 It may have become unfashionable in this age of populist politics and do-it-yourself expertise to hand it all over to those in the know, but remember: undoing a design problem in your house, especially in a room as complex as a contemporary kitchen, usually turns out a lot more expensive than getting it right in the first place. So do yourself a favour and spend a little more on your own peace of mind. Consult an expert before dashing off a drawing on a napkin after a glass or two and presenting it to the builder the next morning. Otherwise the party may never make it to the kitchen. 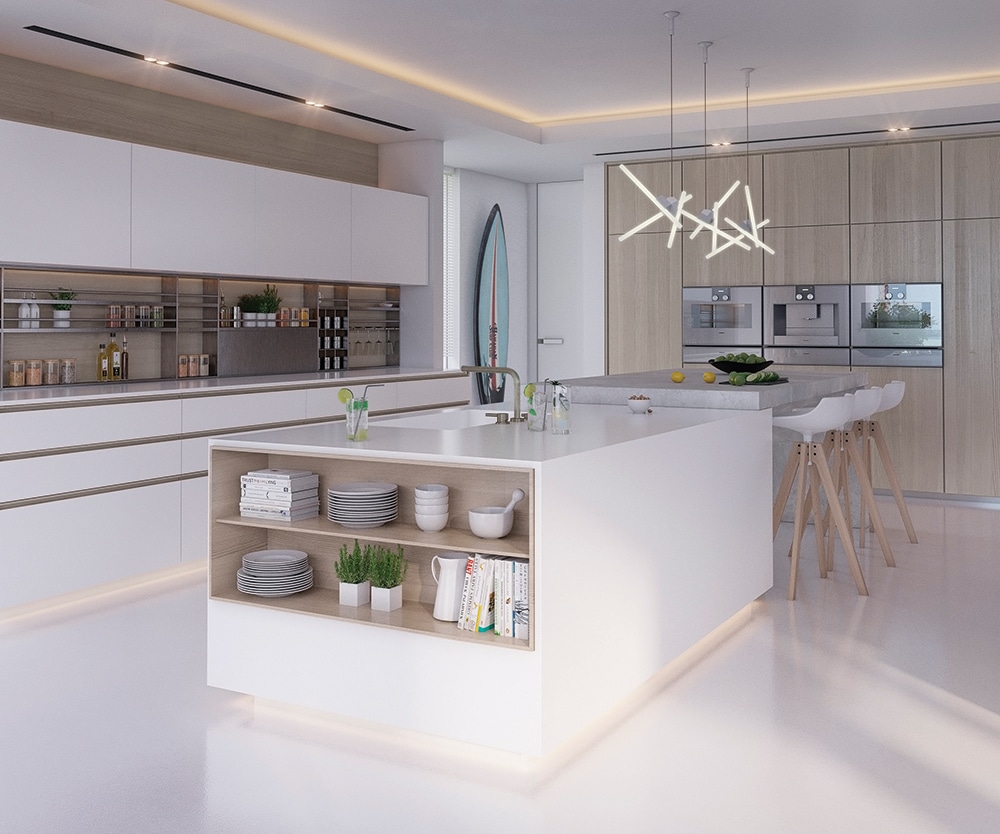 Above: The Streamline Kitchen. White, clean and fresh, just right for the location of this small, but perfectly formed kitchen in the Caymen Islands. The surfboard on the wall is not just for decoration…

All the kitchens featured in this article were designed and created by UDesign.

This article first
appeared in the
3rd issue of
UD Magazine.